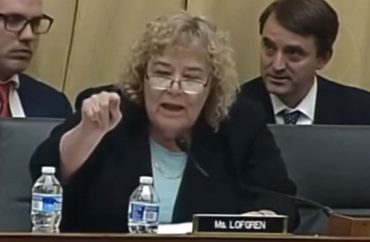 U.S. Rep. Zoe Lofgren, a Democrat from California, recently flipped out on a professor during a House Judiciary Committee hearing on federal overreach regarding Title IX and the pro-transgender bathroom mandate.

Lofgren illustrates perfectly how, when the Left can’t put together a cohesive argument, they resort to name-calling, bullying and shouting people down.

The target of Lofgren’s angst was University of San Diego law school professor Gail Heriot, who dared write this into written testimony submitted to the committee:

We are teaching young people a terrible lesson. If I believe that I am a Russian princess, that doesn’t make me a Russian princess, even if my friends and acquaintances are willing to indulge my fantasy. Nor am I a Great Horned Owl just because—as I have been told—I happen to share some personality traits with those feathered creatures. I should add that very few actual transgender individuals are confused in this way. They understand perfectly that their sex and their gender do not align. Some choose surgery to make their bodies better align with their gender. Most choose not to.

That’s when the chairman had to break it up and tell Lofgren she was out of order.

When the professor quipped: “Does that mean you think I am a Russian princess?” Lofgren could only respond “I have no idea.”

Several leftwing media outlets touted the exchange as a win for Lofgren, but in actuality it shows how the only response the left has to legitimate criticism is to shout down opponents and call them names.

Heriot’s written comments were couched in a 21-page statement that completely obliterates the feds’ claim that Title IX allows men to use the women’s restrooms and vice-versa. It’s a very worthy read.