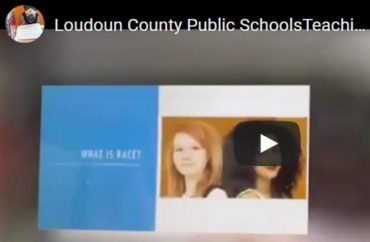 But in the age of critical race theory, that’s the wrong answer.

A nearly two-minute video posted this week on YouTube shows a teacher telling a student that a picture of two people — a white woman and a black woman with a caption “What is race?” — is supposed to be answered by saying that the two people are different races.

The Daily Wire reports the video was taken from a dual-enrollment college level English class from the Virginia-based Loudoun County Public Schools district.

Below is a transcript of the video published by the Daily Wire:

Teacher: Tell me what this seems to be a picture of.

Teacher: Right, just two people. Nothing more to that picture?

Student: It truly is just two people though, is it not?

Teacher: I think you’re being intentionally coy about what this is a picture of.

Student: What am I being coy about? It’s two people standing back-to-back in a picture.

Teacher: Yeah, and that’s all you see? Just two people?

Student: I’m confused on what you would like me to speak on.

Teacher: I don’t think you are. I don’t know why you do this. I’m not trying to call you out, but you … you act as if there’s nothing noticeable about this apart from the fact that there’s two people.

Student: Well I’m confused. Are you trying to get me to say that there are two different races in this picture?

Teacher: Yes, I am asking you to say that.

Student: Well, at the end of the day, wouldn’t that just be feeding into the problem of looking at race instead of just acknowledging them as two normal people?

Teacher: No, it’s not. Because you can’t not look at, you can’t look at the people and not acknowledge that there are racial differences.

The school district has released a statement on the matter that states “misconceptions and misinformation persist” and that the district “recognizes the right of its employees to free speech, but does not condone anyone targeting members of the community for their viewpoint.”

Loudoun County Public Schools “remains committed to its equity work,” the statement added. “At the outset, we knew this work would create many hard, but necessary, conversations.”

“…In the near future, LCPS will be sharing more communications about our equity work so that our community has a deeper understanding of the journey we are on to provide the best education for all of our students.”