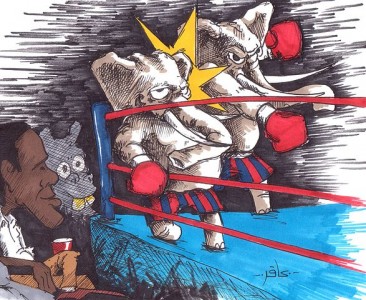 Mitt Romney was too conservative. Or was he too moderate? Does the GOP need to reach out to Latinos more or move right and energize their conservative base? Today Republicans are left pondering why they lost this election.

Democrats are in a celebratory mode, despite a looming “fiscal cliff” and serious economic promises facing the nation. Republicans, many who predicted that Mr. Romney would pull off a decisive victory, were left confused but with plenty of blame. Karl Rove on Fox News was even criticizing the station for calling Ohio too early.

Late night reversals and predictions gave the presumed “red” state of Virginia to Obama. The intensely close nature of the Florida race showed that Mr. Romney was in for a tough night.

There is evidence for those in the GOP who claim that it is not the Republican vision that was rejected by American voters, but rather the extreme on the ideological right. Democrats retained control of the Senate after a series of Tea Party inspired nominations made gaffes regarding abortion and rape. If it had not been for these nominations, more traditional Republican candidates would have won, they claim.

Steve Hayes, columnist for the Weekly Standard, disagreed and argued that it was moderation and lack of serious conservatism that was culpable for the defeat. He said the future of the GOP relied on “substantive conservatives,” like Bobby Jindal. He argued that the American public wants “people who are big thinkers and who get stuff done and people like Scott Walker, Marco Rubio…”

George Will, a conservative commentator, said on ABC News that there were now “two factions in the Republican Party”, saying that there was a libertarian group focusing on pocketbook issues while the social conservatives focus on abortion and gay marriage. Mr. Will also derided the President saying that “Obama wants to be on the Mount Rushmore of liberalism.”

Though Mr. Obama retained a sizable part of the electoral college, the nation is still starkly divided. For much of the night Mr. Romney held a lead in the nation popular vote, though it is approximately 50 % to 49% for the President now.

A changing demography of the American electorate could also be a conundrum for future Republican politicians and leaders. Whites, though breaking toward Mr. Romney, are being overruled by a growing Latino community. Other minorities including blacks also overwhelmingly support Democrats and liberal policies.

“It is going to take a long time for the Republicans to get the state of the country,” Matthew Dowd, a consultant to George W. Bush, opined.  Many in and out of the GOP echoed similar sentiments.

In election night speeches to the divided public both Mr. Romney and the incumbent struck conciliatory and bipartisan tones. Mr. Romney chided “partisan” bickering while Mr. Obama specifically said he would “sit down with Gov. Romney” to deal with big issues.

President Obama’s speech was delivered in an optimistic tone, however he laid out a liberal agenda despite the fact that nearly half the nation voted against him and his policies. He stated that citizens must not ask what government will do for them and must rely on self-governance, while also saying that we are a co-dependent family.

How the social conservatives, libertarians, and moderate Republicans mend will take a long time to see. The crucial question among the caucusing Republican lawmakers heading to Capitol Hill is which post-loss narrative will prevail? Some fear a greater shift to the center, while others warn against a turn to the right.

What is certain is that all Americans will see partisan gridlock put to the test again soon, as the debate over the “fiscal cliff” comes near.