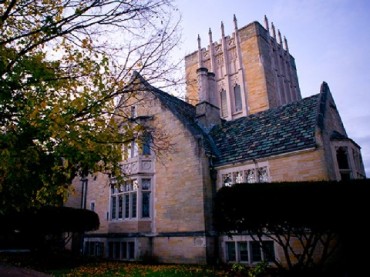 OPINION: The best thing Grove City College taught me was how to think

I practically had my nose pressed to the window in the backseat of my parents’ car as we rode through the campus.

It was about 10 p.m. on a cold March night in 2009, and we were rolling slowly down the roads of Grove City College. A group of boys played Frisbee golf in the dark, while a pair of laughing girls sipped smoothies as they entered a dorm across the street.

The college’s stately Gothic buildings rose ahead of us as we drove, inscribed with statements about the importance of religious liberty and a true liberal arts education. I’d already made a few college visits, but for some reason, this campus had me entranced. I was a junior in high school, and even though I had barely set foot on the college’s grounds, I knew that I didn’t want to attend any other college.

Grove City College, from which I graduated last month, drew me in for the very reasons that make it stand out among colleges in the U.S.

First, it’s conservative – so conservative that the college fought its way to the Supreme Court to keep the government from forcing it to be federally funded.

In Grove City College v. Bell, the court ruled that the school was free to end its participation in the Basic Educational Opportunity Grant program, which had made it subject to Title IX nondiscrimination requirements.

The college has provided an education through a Christian worldview since its birth. Its founders believed “that the fruits of civilization would be destroyed if religious and ethical roots were allowed to wither.”

Looking back on my four years there, the best thing that Grove City College taught me, rather than how to achieve good grades, balance extracurriculars or boost my resume, was how to think.

My professors challenged me both in the classroom as well as in my on-campus jobs, mainly, the student newspaper. Many Grove City College professors strongly encouraged discussions and debate in the classroom, and they are willing to listen to a variety of opinions.

Though they teach from a Christian worldview, they don’t shove their beliefs down their students’ throats or scoff at anyone who holds a different opinion.

I never had to compromise my beliefs, or write a paper about a topic I didn’t really believe in, just to receive a good grade.

In fact, my professors showed me that the meaning of a good student does not lie in a high grade – and trust me, I had my share of bad ones. Instead, my biggest lesson was to learn how to find the answers I was looking for, in research papers, projects, and journalism stories.

My professors fueled my curiosity and constant desire to find new information.

As a Roman Catholic, I faced numerous challenges about my own faith from the college’s predominant evangelical Protestants, who are passionate about their religious beliefs. (Grove City is a member of the Association of Presbyterian Colleges and Universities.) The questions my peers posed taught me to re-examine my own beliefs and to truly learn how to articulate them. My four years of college made me a much stronger Catholic.

Grove City College advocates for individual responsibility and freedom and promotes the advancement of a free market system as well as civil and religious liberty. It encourages its students to seek objective truth above all else. Few schools remain in America that unapologetically hold fast to these principles, while many higher education institutions blatantly reject and scorn them.

The college’s location, about an hour north of Pittsburgh, also played a major role in shaping my conservatism.

Grove City’s local population is hardworking, and while its residents generally prefer to keep to themselves and their communities, they are very friendly when approached. Their priorities are their families, making a decent living, and often, their religion. I took this conservative lifestyle for granted until I interned in Washington, D.C. for the first time a year ago.

When I returned to school for my senior year, I truly began to appreciate Grove City’s values and priorities.

Politicians in Washington often have no concept of what life in a place like Grove City is like, yet it represents so many of America’s citizens. Grove City’s people want to keep the money they make and support their families without the government interfering in most aspects of their lives.

I’ve only been a college graduate for about a month, but I can say my four years at Grove City College afforded me some of the best experiences and opportunities of my life. I faced my share of challenges with the help of friends, professors and coworkers who I never would have met at most other schools.

As I’ve made the transition from college life the past few weeks, I’ve often found myself flashing back to my first cold March night on campus.

I wouldn’t have done a single thing differently.