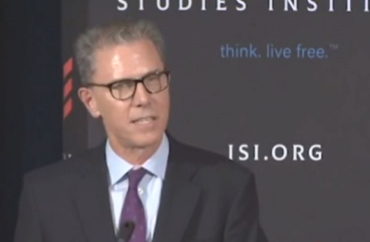 As a Delaware state senator in the 2000s, Charlie Copeland led efforts to enact education reform in his state. He took the helm of Intercollegiate Studies Institute three years ago and continues to tackle that effort on a national scale.

In a recent interview with The College Fix, Copeland called higher education’s lack of viewpoint diversity “the underpinning issue that is facing colleges and universities today.”

Many courses students are required to take today have no application to critical thinking skills needed in the real world, he said. Meanwhile, conservative students are forced with a tough choice, play along with ultra-left professors or risk their GPAs, he said.

The College Fix asked Copeland about the challenges facing right-of-center students and faculty as he leads the institute, a nonprofit educational organization that promotes conservative thought on college campuses, in this tumultuous time for higher education.

What drew you to take the position of president of Intercollegiate Studies Institute?

ISI was founded in 1953. Why would you say it’s more vital now than ever?

It’s more vital now than ever because the academy, the college and university space, the faculty and the administration, are so much further to the left than they were before. When William F. Buckley Jr. wrote God and Man at Yale in 1951, he was very prescient in talking about this left and secular humanism movement on college campuses, but at that point in time it was still a reasonably balanced place. As time has gone by and the left-leaning faculty has brought in even more radically left faculty to follow them, the space on campus for the free discourse of different ideas and different thoughts and diversity of opinion has gotten harder and harder and more and more fragmented. And so an organization like ISI serves as a para-university — para meaning next to — we get to come in next to the existing university structure, those extremely progressive, left-wing, if not even Marxist professors, and bring a diversity of viewpoint that decades ago you could find on campus, but today on many campuses it’s not there at all.

ISI has a presence through our faculty network and through our student members on 40 percent of America’s college and university campuses. So we are playing an outsized role in bringing diversity of thought and diversity of opinion to what used to be the central role of university.

Is the lack of viewpoint diversity the number one issue facing higher education today?

I think that is the underpinning issue that is facing colleges and universities today, and with that the hubris and arrogance of the left-leaning faculty, the outsized opinion they have in that they are right and therefore other opinions need not apply, also then lends itself to things like the double-the-rate of inflation cost increases of college and the fact that government is the only organization or entity that can offer debt to students because nobody else can understand the importance of what these faculty members or ideologues are expressing. That lack of viewpoint diversity lends itself to the underpinning of what’s causing all the other problems on college and university campuses.

What is your take on the snowflake generation?

You are starting to see this play out in the corporate environment, organizations where their employees are literally signing petitions or threatening to go on strike because the company is providing services that they disagree with, and they are unable to balance their own sense of outrage with the fact that different people hold different opinions and we ought to respect those differences. It’s a small percentage of people that carry this forward, but have an outsized influence. Everybody is going to be offended at some point during their life and part of being an adult is to recognize that it’s not that big of a deal.

But universities don’t teach students how to be adults. Do they coddle them?

They absolutely coddle them. When they go through freshman orientation, and they all get to fill out what their personal pronoun is rather than he or she — everybody has the right to avoid being upset over anything, which by the way doesn’t work, because at the end of the day people have always had to deal with things they disagree with. But yes, they are absolutely coddled, which is why you see grade inflation, bias response teams, and the anti-free speech movement, and it’s driven almost exclusively by the left.

What are you hearing from your scholars affiliated with ISI? What’s their biggest concern?

Depending on where they are in their tenure process and their own personal personality, many of them just try to keep their head down and hide in plain sight. That is a not infrequent occurrence from some of our faculty associates. Now some others are much more direct and fight for the recognition that diverse opinion deserves on campus. Many of them have built quite significant networks, not just of conservatives but also of older school liberals who believe in free speech and diversity of opinion and the creation of critical thinking skills. In a small percentage of campuses, 5 to 10 percent, they actually carve out space for conservative viewpoints, but again that is on 5 to 10 percent of campuses, where it used to be on 90 percent of campuses.

Are ISI students and faculty facing more trouble and pushback now more than ever?

The average conservative student is concerned that, ‘Gee, if I am in this class that I need to have for my degree, and I have to take it with this professor who has demonstrated outward animosity towards conservative students and conservative thinking, so I now have to hide my opinions and views so I can get through this class and get a decent grade.’ That is something you shouldn’t have to do. Faculty members should be able to be upset and still be objective in their analysis and we are finding that there are faculty out there that our students have to take classes from who do not want freedom of thought. Our students are stuck in a quandary of having to subjugate their own views and thinking to that of the professor, and that is very problematic and troubling.

Is ISI necessary because of the failure of the university?

Given where the university is today, students do not learn content about free markets, Austrian economics, Hayek, Adam Smith, or Western European and American history. On many campuses today you don’t have to take any American history to get a history major. Somebody has to be out there providing that content and come along the university and provide that core curriculum that used to exist on almost every campus. The need for ISI is far and away greater today because the leftist faculty on all these campuses are just redlining those topics to basically change history. George Orwell wrote, ‘If you want to control the future you control the past, and if you want to control the past, you control the present.’ These faculty members believe they can control the present and therefore eliminate all these other areas of study and therefore control the future.

And aren’t we kind of seeing that in young voting trends? Most students coming out of college are voting Democrat and buying into Bernie Sanders and AOC, is that the ultimate ramification?

Some of that is the students themselves aren’t necessarily any more left wing than you or I might have been at that age, but that they are not getting the full, rounded history. When you see these polls that say 70 percent of students say ‘socialism is better than capitalism,’ I don’t think they have any idea what they even mean. What does socialism mean to a student who has never actually been educated on what socialism is and how Marx and Engels laid out the whole Marxist direction in The Community Manifesto and what does government controlling the means of production mean? The universities have completely ignored that education because they want to move a specific agenda because they do know what socialism is and they promote it.

Does ISI have particular themes or projects that it wants to emphasize or prioritize given the reality we face?

We’ve really refined our curriculum over the last number of years to the politics, philosophy and economics interdisciplinary area of study. What is a functioning society, what are those root aspects to it that really make the vast majority of citizens flourish and prosper. What are the economic requirements, the political requirements around that — what are the philosophical underpinnings about respect and dignity for your fellow human that need to undergird all those things: free markets, limited government, property rights. Those are the things we very much stress and the left is trying to completely move away from.

What is the difference between ISI and other conservative campus groups?

We target a very specific set of students. We want really bright, deep-thinking, intellectually curious college students who want to dig into the content. Our students are not necessarily activists although they are going to be and are active. There are a lot of groups on campus today — College Republicans, YAF, YAL, Turning Point — that do a lot for activists, and so they’ll host large events and talk about how do you be more active. What we do is we provide an intellectual content that they don’t that’s much deeper. It’s driven by in-depth reading of Russell Kirk or Hayek or Adam Smith or Edmund Burke, and going all the way back to Plato and the Roman republic and western Judeo-Christian concepts. Our students spend a lot of time thinking deep thoughts, debating these issues in society groups, in debates and lectures, on weekend conferences, it’s much more geared towards intellectual development than it is towards political or societal activism. Again, our students are active, but that’s not what we focus on.