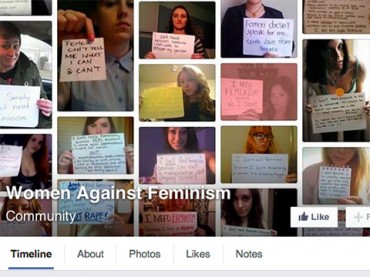 The #YesAllWomen campaign has found itself an opponent in the ongoing “war on women,” as the social media campaign Women Against Feminism has risen to prominence in the past few weeks.

The surge in popularity for the campaign, which started about a year ago, apparently came from a BuzzFeed listicle on July 11 that incredulously stated: “‘Women Against Feminism’ is a real thing.”

The campaign’s Facebook page, which dates back to January and has more than 16,000 “likes” as of Monday, said Friday its hashtag #womenagainstfeminism was trending on Twitter “for 3rd straight day” and it received national and international media attention.

Women Against Feminism, whose main presence is an anonymous page on the image-centric blog service Tumblr, started in 2013 as a platform for young women to anonymously speak out and share their reasons for being “anti-feminist.”

The Tumblr page is largely comprised of pictures of female millennials holding up handwritten signs explaining their stance on feminism. “I do not need or want modern feminism, because it has become confused with misandry which is AS BAD as misogyny,” a submission to the Tumblr page states, “and wherever [sic] I want to do or be in life, I WILL BECOME THROUGH MY OWN HARD WORK.”

The anonymous purveyor of the blog published a lengthy explanation of her grievances against modern feminism last August, stating that the movement “is about socially engineering society to give special privileges to women and special punishments to men. That’s not equality. That’s not respecting genders.”

Further, staunch feminists themselves are the worst offenders when it comes to objectifying women, according to the blogger.

“A lot of feminists seem to think they have been appointed the Women Police who can then go around shaming other women for the things that are ‘not okay’,” the post says. “Makeup, shaving, wearing pink, and more are all ‘crimes against feminism’ and punishable by social attacks.”

“I don’t need (modern) feminism because the world needs equality, not superiority,” one submission to the Facebook page reads. “How would people react if ‘masculism’ became a thing? NOT WELL.”

Some women have met the rising popularity of the movement with ridicule and vitriol.

“There is no question that Women Against Feminism is utterly and completely misguided in its understanding of what feminism is,” writes Emily Shire of The Daily Beast, stating that the movement’s criticism of feminism is “inane, unintelligent, and useless.”

Shire reached out to the moderator of the Tumblr page for comment, but was declined by someone named “Mel” from Women Against Feminism.

“We are familiar with the DB and it’s slant. We don’t expect to get fair treatment. The media has been pretty insulting (and childish) so far. So we’re just sticking to our own self-expression through social media,” Mel replied.

The moderator of the Tumblr page did not respond to a request for comment from The College Fix.

Many of the women posting on the Tumblr page appear to be millennials, prompting cries of youthful ignorance from critics.

Feminist writer Rebecca Brink published a satire of the campaign on her blog, calling Women Against Feminism “a crock of bullshit based on a misunderstanding of feminism and an ignorance of data and history.” “I don’t need feminism because I’m a teenager who hasn’t entered the workforce yet and I don’t know what constant sexual harassment or watching unqualified people get promoted over me feels like,” said one handwritten sign held by an unidentified woman on Brink’s page.

Those who object to the movement have also questioned the validity of the anti-feminists’ arguments.

“Some of the reasons they give for not needing feminism almost seem like a parody (‘How the f— am I suppose to open jars and lift heavy things without my husband?’) and some (‘I don’t need to grow out my body hair to prove I’m equal to men’) just make me wonder where in the world they got their definition of feminism,” said Jenny Lawson of The Bloggess at the Huffington Post.

Others in the media have spoken out in support of the message behind the movement.

“[W]hile the anti-feminist rebellion has its eye-rolling moments, it raises valid questions about the state of Western feminism in the 21st Century — questions that must be addressed if we are to continue making progress toward real gender equality,” Reason contributing editor Cathy Young wrote at Time.

In response to the feminist argument that anti-feminists do not comprehend the dictionary definition of feminism as “the theory of the political, economic, and social equality of the sexes,” Young said the anti-feminists are “judging modern feminism by its actions, not by the book. And here, they have a point.”