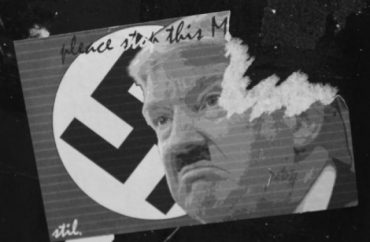 You’ve likely heard the stereotype that academics “live in an ivory tower,” and in many cases it’s all too accurate.

One Yale University professor recently proved it in a big way.

“Fascism is a cult of the leader who promises national restoration in the face of supposed threats by leftist radicals, minorities and immigrants,” Stanley told Goodman. “He promises only he can save us. In the RNC, what we saw is we saw a cult of the leader. The Republicans didn’t even bother to provide a platform. They just said, ‘Whatever Trump wants.’”

Stanley, who once said “Fuck those assholes” to peers who differed from his views on homosexuality and claimed critics of leftist “crybullies” are the real threat to campus free speech, notes that when his book “How Fascism Works: The Politics of Us and Them” came out two years ago, people “accused [him] of hysteria.” He asserts folks’ reasons for that claim “have fallen to the wayside.”

But have they? Consider:

— The Trump administration “tacitly endorses” right-wing militias. Where? When? How? Stanley doesn’t elucidate, but he does compare this supposed “endorsement” to Nazi Germany’s looking the other way while fascist thugs roughed up Jews in the 1930s.

Two of the more common claims to back up this “endorsement” assertion are the president’s “fine people” line in reference to the 2017 Charlottesville protests, and his recent words about Kenosha shooting suspect Kyle Rittenhouse. The former is a flat-out falsehood, while the latter is about a single individual who, according to his attorney and various news reports, acted in self-defense. The president notably couched his Rittenhouse remarks with “I guess,” “appears,” and said the shootings are under investigation.

Of course, missing from the media and progressive pundits regarding the Rittenhouse situation is the fact that Democratic local officials — from governors on down — did next to nothing when BLM and Antifa “protesters” tore cities asunder and threatened, attacked, and even killed several people. Many of those who were arrested ended up being quickly released. Such actions (or lack thereof) serve to make a Rittenhouse-like situation virtually inevitable.

Stanley, with little-to-no first-hand knowledge of the Rittenhouse situation, calls the suspect a “murderer” and “radicalized.”

— The Justice Department isn’t independent. In other words, there should be no repercussions for law-breaking government officials who devised and carried out the whole Russia conspiracy/hoax. Because those involved meant well. Because Trump is bad. Or something. (And never mind former AG Eric Holder referring to himself as President Obama’s “wingman.”)

— Criticism of the media is Hitlerian. The Nazi Germany analogy continues with a comparison of Trump’s hatred for the mainstream media to the notorious antisemitic screed “The Protocols of the Elders of Zion.” This infamous book invoked the conspiracy that “Judeo-Bolsheviks were behind liberalism and controlled the media, controlled the cultural institutions, [and] where bankers were in cahoots with media […]” Stanley claims “we saw this at the RNC” and uses Senator Tim Scott‘s comments about “Manhattan elites and Hollywood moguls” bringing socialism to the US as proof. (Criticizing a black lawmaker? Is Stanley a … racist?)

— Trump’s an authoritarian because he didn’t call Chinese pro-democracy protesters “rioters.” Hilariously, Stanley doesn’t see a difference between people protesting against a decades-old brutal communist regime that’s clamping down on what used to be a free-market democratic entity, and privileged, mostly white American yuppies tearing up cities for [fill in cause du jour].

— The Trump administration ignores science … just like Hitler. Although Stanley says he’s not comparing leaders of countries with high rates of COVID-19 infections (like Trump) to the dastardly Adolf H., he goes ahead and does it anyway:

[b]ut these are hypernationalist leaders that see the world in friend-enemy distinctions. And as Hitler says in Mein Kampf, science is just a tool for national glory. So, the only way such leaders are going to drag scientists up to the podium is if these scientists are yes men for the leaders, praise the leaders, because that’s all this kind of politics is: You’re either with us or against us. And science, by its nature, facts, by their nature, do not have a side.

Maybe, just maybe when Mr. Trump moves to shut down the Big 3 news networks along with CNN and MSNBC, arrests and jails journalists unfriendly to him, imposes nationwide martial law to deal with Antifa and BLM rioting, and declares Joe Biden and his candidacy “unlawful” … then we can consider Prof Stanley’s rantings more seriously.

MORE: Prof’s new book: What if Trump won’t give up power upon losing election?