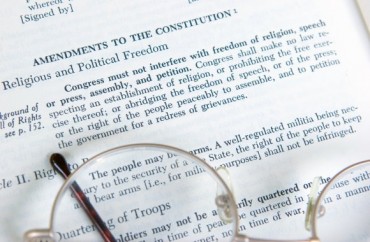 Yale University was nationally embarrassed earlier this week when political satirist Ami Horowitz released a video showing students happily agreeing to sign a “petition” that calls for the repeal of the First Amendment of the U.S. Constitution.

According to Horowitz, he got 60 signatures in less than an hour.

Now Yale’s spokesperson has suggested the video doesn’t show what it shows.

“There are a number of heavily edited prank videos like this one circulating lately in which someone surreptitiously records people while pretending to support a position that they actually oppose, and trying to get the individuals they speak with to agree with them,” Yale spokesperson Tom Conroy told Fox News in an email. “I have to acknowledge that I don’t take them seriously as an accurate representation of what every person interviewed or shown in the videos believes.”

Here’s another way to look at it, Mr. Conroy. Students attending one of the most prestigious universities in the nation should comprehend what it means to repeal the First Amendment when they’re asked. Perhaps, the truth of the matter is, many Yale students support its repeal.

But take heart, a few Yalies had the appropriate response, expressing sadness and shame at the video, Fox News reports.

“It’s a sad commentary on the present state of public opinion,” said Professor Bruce Ackerman. And freshman Grant Richardson told Fox News:  “It numbs the mind that dozens of Yale students could sign a petition to revoke the First Amendment.”