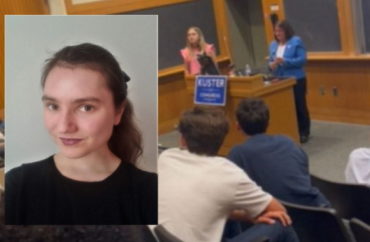 HANOVER, N.H. — At a College Democrats-sponsored event at Dartmouth College on Thursday, I demanded some answers from guest Rep. Ann Kuster, who is seeking reelection, about her stance on pornographic material in local K-12 school libraries.

I also wanted to ask her about some outlandish comments made on Twitter by Ray Buckley, chairman of the New Hampshire Democratic Party, who dismissed parental rights.

I attended the event with Dartmouth alumnus Griffin Mackey, who is working to get Kuster to state on the record what her stance is on inappropriate material in school libraries.

She evaded our question of whether they belong on shelves in elementary schools. She said “books don’t make you gay” and stated the topic is not pertinent to her role in Congress.

Shortly after, she left the auditorium. Mackey and I followed her to her car to get answers, but to no avail.

Now, some of my left-leaning peers have accused me and Mackey in online chats of disrupting the event. That’s false, but what’s more, there’s irony in this accusation.

The Dartmouth Democrats denounced our event on social media and shouted outside the event in protest. After it was over, some students effectively prevented Rep. Cawthorn from leaving the venue despite the fact that he is in a wheelchair. They stood in front of him and hammered him with questions. They also crowded around our other speakers, doing the same thing.

Last winter, the antifa-inspired Darmouth Anarchists created an Instagram page and coordinated with comrades in the region to make threats to shut down an event with independent journalist Andy Ngo. Sadly, the Dartmouth administration forced our event online at the last minute, capitulating to left-wing extremism on campus.

Free discourse is especially critical in Kuster’s race, since as of now, she has refused to schedule debates with her Republican opponent, Bob Burns, despite the fact that the election is weeks away. 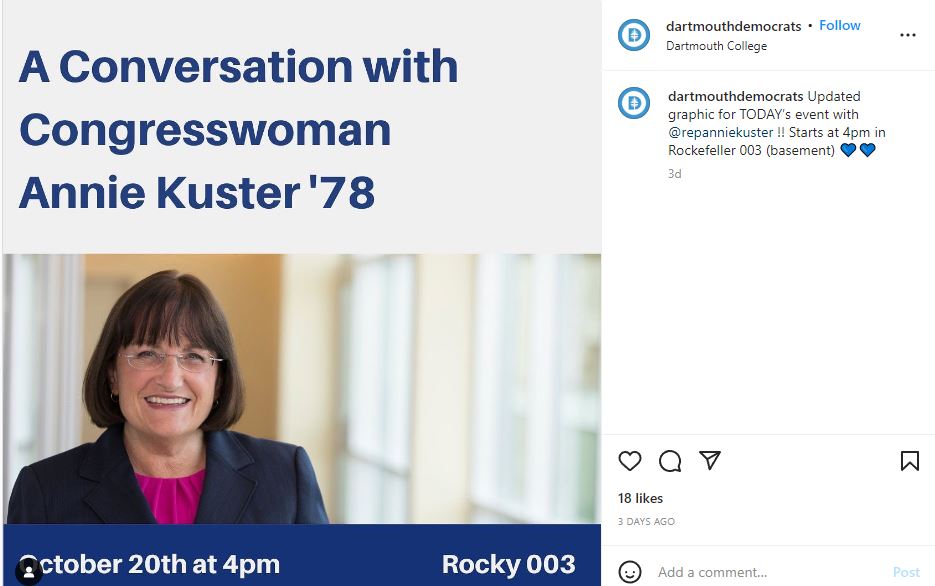 Just days earlier, Burns attended a mid-October townhall at Dartmouth hosted by the nonpartisan Dartmouth Political Union, which Kuster refused to attend. Burns had no problem answering a variety of tough questions from a challenging crowd.

Kuster would only agree to show up for the Dartmouth Democrats. With this as the backdrop, enter Thursday evening, when it was finally time for Republican students to ask some tough questions during the “Conversation with Congresswoman Annie Kuster ‘78” event. Kuster represents Hanover and she is my congresswoman.

Mackey and I sat through her short five minute speech, during which she talked about climate change, some trauma she experienced on Jan. 6, and conflated late-term abortion with miscarriage, in addition to making other leftist talking points.

When the Q&A began, the Dartmouth Democrats only called on their friends. Mackey and I raised our hands and were ignored, despite the relatively small size of the audience of about 25 students.

At the end of the event, I stood up to ask Rep. Kuster about some recent comments made by Buckley, the New Hampshire Democratic Party chair. Buckley had made outlandish comments in response to a recent press conference that Leavitt, a Republican running for Congress in another district in New Hampshire, held on parental rights in education. 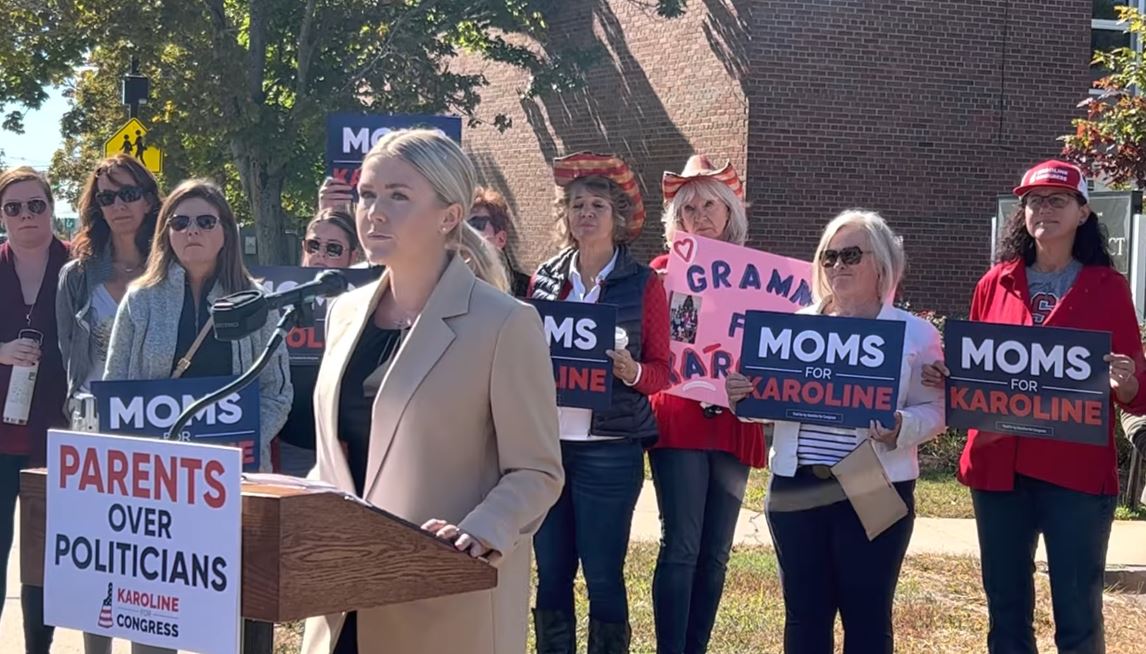 “You’re purposely going after children, endangering their lives, mental health & safety and its disgusting,” Buckey tweeted Sept. 30 in response to Leavitt’s press conference that criticized pro-transgender ideologies in schools as well as pornographic books young children have access to in the public school system.

Buckley continued: “Not all families are the same, some kids will be kicked out or beaten (to death), or commit suicide. All to try to get votes for Karoline?”

I asked Kuster about Buckley’s tweet: “He speaks for the New Hampshire Democratic Party of which you are a part – does he speak for you? Do you agree with that?”

As I asked the question, a Dartmouth Democrats leader told Kuster “you don’t have to answer that.” Kuster cut me off anyway, saying it’s not in her purview, student organizers began shouting, her aides started talking, and the room sort of erupted in a cacophony of confusion.

Kuster sarcastically remarked that she didn’t care about banning books in school libraries. Mackey then told Rep. Kuster he helped file a right to know request in the Hanover public school system over some books in K-12 libraries that contain shocking pornographic content. 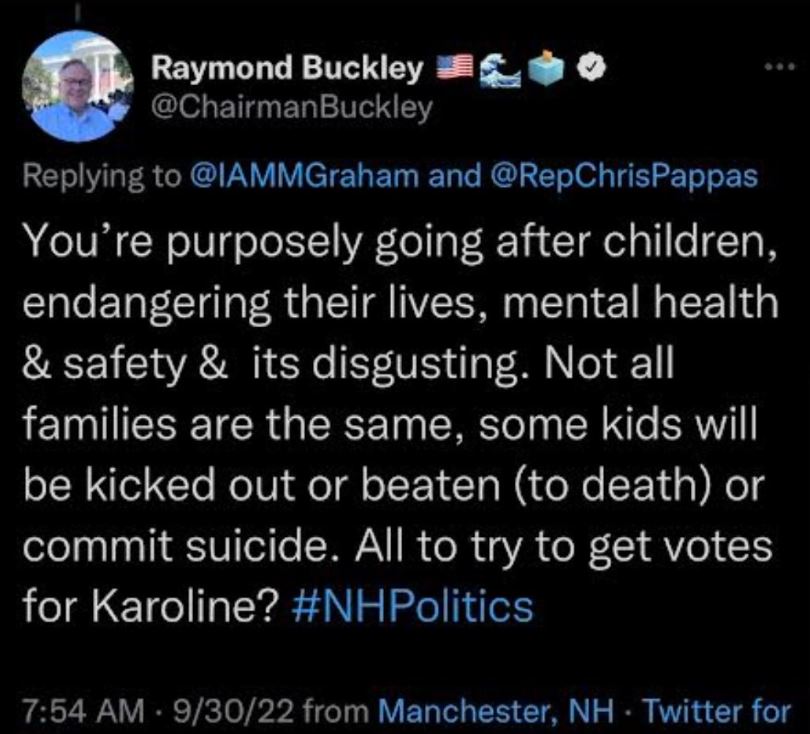 The books have sparked controversy and outrage from parents in school districts across the nation, such as “This Book is Gay” by Juno Dawson, “Flamer” by Mike Curato, “Sex: An Uncensored Introduction” by Nikol Hasler, and “Genderqueer” by Maia Kobabe.

As Mackey continued, aides moved toward him to tell him he had to leave, and shouts and name-calling ensued. Kuster left the room after that. Now some leftist students have accused Mackey and I of chasing Kuster out of the event in online chatter.

False — we politely and quietly sat through her entire speech and most of the Q&A before we finally tried to get our questions answered.

We followed Kuster out to her car and demanded answers. Buckley is the leader of the Democratic Party of New Hampshire. Asking Rep. Kuster her thoughts on Buckley’s recent statement over parental rights is not unreasonable, nor is asking her about the books in the Hanover public school system. After all, she frequently comments on state politics.

I have no regrets. Rep. Kuster is a public servant, and she implored all of us to vote for her at the end of her speech.

As for Buckley’s ridiculous tweet, to this day, there has been no record of any New Hampshire parent beating or murdering their child due to their sexuality.

MORE: Dartmouth shut down my campus event featuring Andy Ngo — then blamed me for it