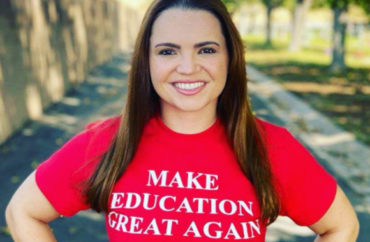 “When my title was revoked because I was very open and honest with my political beliefs, I was just so very tired of feeling like I was being censored for my own thoughts,” Katie Williams told The College Fix. “I just got to the point where I was over it.”

Williams, previously Ms. Nevada, said she was disqualified from the Ms. America pageant because of her conservative beliefs. A mother, military service member who deployed to Afghanistan, and previous small business owner, her experience with censorship in the pageant motivated her to try something entirely new.

Now, Williams is a member of the Board of Trustees for the massive Clark County School District in Nevada.

‘The only way to change generations is to educate them’

In early 2020, one of Williams’ friends suggested she run for public office.

“I actually looked at the school board first,” she said. “I saw how many of our kids are impacted here in Clark County by the decisions that are made by the people on that board…That was where I knew I wanted to be.”

Education, she argues, is the best way to make a difference.

“You have to put those ideas in there, and the facts in their heads, and let them make their own decisions. That’s the only way you can actually change generations,” she said.

Since being elected in November 2020, Williams has had to learn the ins and outs of governing, as well as adjust to the environment of the board.

“It’s very different for me as a conservative. I’m the only Republican that serves on that board,” she said. “Their political ideologies range from moderate liberal to socialist to libertarian–all over the place.”

At a time when schools were still not even open, Williams’ conservative perspective gained her a win, with 61 percent of the vote. It also generated a lot of pushback, including some asking for a recall.

“A lot of people have this misconception that I am against education, and I’m not,” Williams said.

When facing attacks, she suggests asking only one key question: did you do everything in your power to be true to yourself?

“When it comes to getting pushback, you just have to know…at the end of the day, can I go home at night, sleep in my bed, and sleep well and know that I made the right decision regardless of whether people are saying mean things to me or not?”

“I read a lot of books. I listen to a lot of radio shows, podcasts, things like that, and just really truly try to make up my own opinions about things,” she said. “And sometimes I’m wrong, sometimes I’m right, sometimes I don’t know if I’m right or wrong, but I know what I feel.”

Sometimes, she’s the only dissenting voice on the board. That was the case with a recent resolution to include a safe gun storage flyer with student registration packets, which Williams called “a waste of time [and] waste of paper.”

While any loss of student life is tragic, Williams said her issue was with the false narrative that the flyer would prevent suicides, when the data does not suggest firearms alone are a major cause.

“You know how you impact suicide rates? By not shutting down our kids’ schools,” she said.

At other times, Williams has faced pushback even from conservatives, as she did for supporting a grading reform policy, which she said was misrepresented as “lowering the bar” for students by allowing multiple times to retake tests and removing due dates.

“None of that was actually in the policy,” she said. Instead, the policy enabled students’ to demonstrate mastery of subject material on the test, rather than having the bulk of their grades determined by homework.

Yet, the actual pace of the board can be frustrating, especially when wanting to “constantly hit the punching bag and say what you want to say.” But Williams knows the government is slow for a reason.

“I’m glad it’s slow,” she said. “When heated passions get going, people start making decisions and it’s good to have those checks and balances. It’s good to reach across the aisle and find that common ground.”

“Changing education, in general, is getting more parents involved and having them understand what is being taught,” she said.

What that involvement looks like will differ, depending on the circumstances and the state. It could include joining the school PTSA, organizations like Teach for America, or getting involved with school choice groups.

“I would always say get involved with the school board,” Williams said. “A lot of parents don’t even know who sits on their school board.”

When it comes to curriculum and policies on issues like critical race theory and transgender ideology, Williams says it is important to know where decisions originate.

Williams cares about each child in the district, but now that she has a daughter in kindergarten, the stakes feel higher.

“You’re definitely more invested as a parent while serving in this position,” she said. “I think it would be no different than serving on a PTA or school organization team. Your kids are in the system that is being affected by the decisions…”

Reimagining the future of public education

One way Williams hopes to get parents involved is through school choice, which she says is becoming increasingly popular.

“One of the best things about COVID, when we first got shut down and schools went online, is that parents got to see what was being taught in classrooms and parents got to experience choice for the first time. Micro school hubs started popping up, school choice advocates started making cheaper options for private education–I thought it was so great,” she said.

“Some kids just learn better online. I like that it is still an option for students, especially if they have work,” she said. “School choice movements picked up a lot, especially in 2020 and 2021. I think it will probably start to pick up a little bit more, and dip a little bit once we get back into school, but overall it has gained a lot of traction in the last few years.”

Even though people are afraid of change, Williams believes expanding choices is the best path forward.

“Here’s what people don’t understand: there are a lot of good teachers in this world. They are all truly just trying to do their best for their kids. It’s unfortunate that they get roped into this loud obnoxious group of teachers that just want all the benefits,” she said. “[With] school choice, if you’re a bad teacher, you won’t end up staying.”

In addition to choice for parents, Williams would like to see CCSD–which has nearly 45,000 employees–and other large school districts broken up.

“We are one of the major employers in Clark County,” she said. “The problem with that is it breeds incestuous relationships. This person was a teacher for 10 years, now they’re an administrator, now principal, now superintendent. Because they’ve been in the district for so long, they bring other people in…It’s kind of like a good ol’ boy system that you want to break up.”

Williams says she thinks other changes could also be beneficial, like evaluating curriculum, modifying school hours, adding more technical education, and recognizing different needs between rural and urban schools. Education is not one-size-fits-all.

“What I’m trying to do is get to a point where people understand that students don’t learn the same way every single time,” Williams said.

This is also the approach Williams takes to college education, which she says schools are not preparing students well for.

“Seventy percent of our students who are leaving high school and going into a four-year university are having to take remedial math, reading, and writing classes,” she said. “There is a huge disconnect.”

Williams thinks part of the disconnect is due to “teaching students to the test” in an effort to inflate graduation rates. Higher graduation rates mean more money. But for education to truly help students, it needs to be centered on their needs.

“That’s why I love the STEM academies and the CTE academies…that’s where these kids are actually being taught real life skills, for real life jobs, things that they can make money from and support their families.”

Williams hopes to see more of these programs implemented as the years go on. One thing is certain: she will continue advocating for them.

“I never enter into a conversation trying to change somebody’s mind. I just try to get my point across,” she said. “If at the end of the day they don’t agree with me, they don’t have to.”