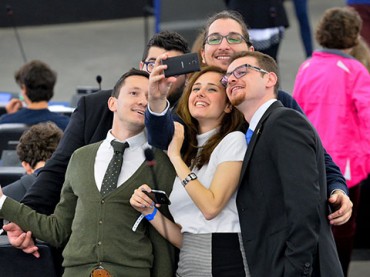 OPINION: Republicans can capture this demographic if they hold back on social issues

The Democratic Party no longer has an undeniable hold on millennial voters, with an increasing number shifting toward the right side of the political spectrum, according to a report issued by Pew Research Center.

A newly identified subset of young voters are now “skeptical of activist government,” and a “substantial majority” of this subset “view government as wasteful and inefficient,” according to the study, Beyond Red v. Blue: The Political Typology, released on June 26.

This group of fiscally conservative, small-government advocates is classified as “young outsiders” by the study, among eight political typology groups that include “steadfast conservatives,” “solid liberals” and “politically disengaged bystanders.”

While young outsiders aren’t entirely comprised of millennial voters, Pew says the category is collectively the youngest of all typology groups, with 30 percent under 30 and most under 50.

The findings of the study complicate the view of millennials from a mere two years ago, when many voters now classified as young outsiders supported the reelection of President Barack Obama.

Sixty-seven percent of voters ages 18 to 29 cast their ballots for Obama, to 30 percent for former Gov. Mitt Romney. Voters 30-44 years old supported Obama 52 percent to 45 percent in support of Romney.

The cause of the rightward shift? Take your pick from a long list of grievances: out-of-control government spending, the soaring costs of higher education, government corruption, staggering unemployment and the uncertain job market, among many other issues.

One of the topic issues in the typology study is entitlement and welfare spending.

Government over-involvement is another issue of top concern, with 66 percent of young outsiders indicating that they feel the government is doing too much to resolve the country’s issues and problems.

While millennials’ viewpoints on government spending and the scope of federal power are shifting toward the right, the demographic holds mostly liberal opinions on social issues, including environmental protection regulations and controversial social policies.

Young outsiders feel that society should accept homosexuality (78 percent) compared to 62 percent of the general population. The group favors the legalization of marijuana (67 percent), and 58 percent believe abortion should be legal in all or most cases.

Yet despite their general resistance to government spending, 68 percent of young outsiders believe that the costs of stricter environmental laws and regulations are worthwhile.

Curiously, young outsiders veer back to the right on the gun-control debate, with 63 percent stating that protecting the right to own firearms is important.

Despite mostly socially liberal viewpoints, Pew predicts young outsiders will still lean Republican when comes to casting a ballot, although the category does not favorably view either political party. This bodes well for the GOP in the approaching midterm elections, but only if they understand the opportunity the party is afforded by this realignment of youth political philosophies. The GOP needs the young outsider demographic almost as much as the group wants stringent, fiscally conservative leaders and representatives, presenting an opportunity for a mutually beneficial relationship that has the potential for a very large return.

Republicans have an opportunity to demonstrate that they are not just the party of stodgy old white men, but also appeal to a vast array of demographics in age and gender.

Young outsiders are largely comprised of two demographic groups that could vastly contribute to improving the GOP’s image problem – youth and women. Women comprise 52 percent of young outsiders, according to the report.

However, there is a large difference between ideological agreement and actual ballots being cast for conservative candidates on Election Day.

The best plan of attack for the GOP is to leave social issues for another day and focus on appealing to young voters with decisive, realistic plans for resolving the financial problems facing our country.

Jobs, the economy, deregulation, entitlement reform and legislation that lowers the cost of college tuition – not combating the social culture war of our elders – are the issues that this demographic wants to hear about.