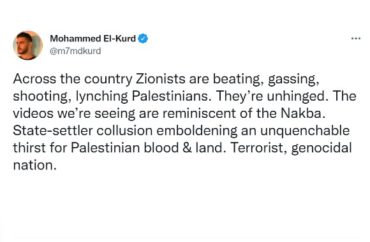 Duke University’s Student Government voted on March 16 to give over $16,000 to an upcoming event featuring a speaker who is a staunch critic of Israel and Zionism.

Mohammed El-Kurd and journalist Ahmed El-Din will speak at the private North Carolina university on March 31 thanks to a $16,835 grant from the student government, according to The Chronicle.

The event is called “Narrating Resistance and Agency: Shifting the Discourse on Palestine” and is hosted by the campus Students for Justice in Palestine chapter.

The allocation to the event raised concerns for some student senators who objected to past language used by El-Kurd to describe the Israeli-Palestinian conflict.

“Across the country Zionists are beating, gassing, shooting, lynching Palestinians,” El-Kurd, who lives in “occupied Jerusalem” according to his Twitter bio, wrote on the social media site.

Those were not all his comments for the day. “YOU ARE KILLING MURDERING BOMBING ETHNICALLY CLEANSING COLONIZING LYNCHING KRISTALLNACHTING US IN REAL TIME CURRENTLY RIGHT NOW,” El-Kurd wrote in all-caps in response to a tweet by Jewish author Ben Freeman.

SHUT THE FUCK UP MY GOD YOU ARE SO DELUDED. YOU ARE KILLING MURDERING BOMBING ETHNICALLY CLEANSING COLONIZING LYNCHING KRISTALLNACHTING US IN REAL TIME CURRENTLY RIGHT NOW AND YOU HAVE THE NERVE TO MAKE HOLOCAUST ANALOGIES WHERE DO YOU GET THE GULL WHERE DO YOU GET THE AUDACITY https://t.co/kZPwNZTB1y

“Would this not send the wrong message and potentially promote violence against Jewish students on campus by providing $5,000 for this individual to speak, despite his antisemitic tweets and statements?” student senator Nicole Rosenzweig said at the meeting, according to The Chronicle.

“[Israelis] harvest organs of the martyred [Palestinians], feed their warriors our own,” El-Kurd said in his book titled “Rifqa.” Senator Alex Dray brought up the quote during the floor debate.

“We are being diligent to ensure that this remains a safe space and not offensive at all,” an unnamed Students for Justice in Palestine member said, according to the campus newspaper. “And I think because of that, we as a club that has a long history here at the campus, and as part of a national organization, we have the ability to keep this dignified and to keep this respectful.”

The vote either did not follow the student government’s own quorum rules or some members abstained from voting. “Of the 58 Senators in DSG, 17 approved the funding and eight opposed,” the campus newspaper reported.

DSG’s quorum rules require at least 30 senators, a majority, to be present for a vote. Only 25 voted, so at least 5 could have abstained.

The student government did not immediately respond to a College Fix email Monday morning that asked for clarification.