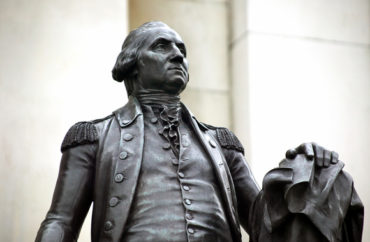 Founding Fathers who owned slaves should have their public statues taken down, according to nearly three-quarters of Democratic students surveyed in a recent College Fix poll.

The online poll asked 1,000 college students: “Do you support or oppose taking down public statues of U.S. Founding Fathers who owned slaves?”

Forty-four percent of Democratic college students polled responded that they strongly support taking the statues down, and another 29 percent said they support the measure, for a total of 73 percent in favor. Another 12 percent were against and 15 percent are not sure.

In contrast, only 4 percent of Republican college students supported the notion while 88 percent were against and 8 percent not sure, the poll results show. 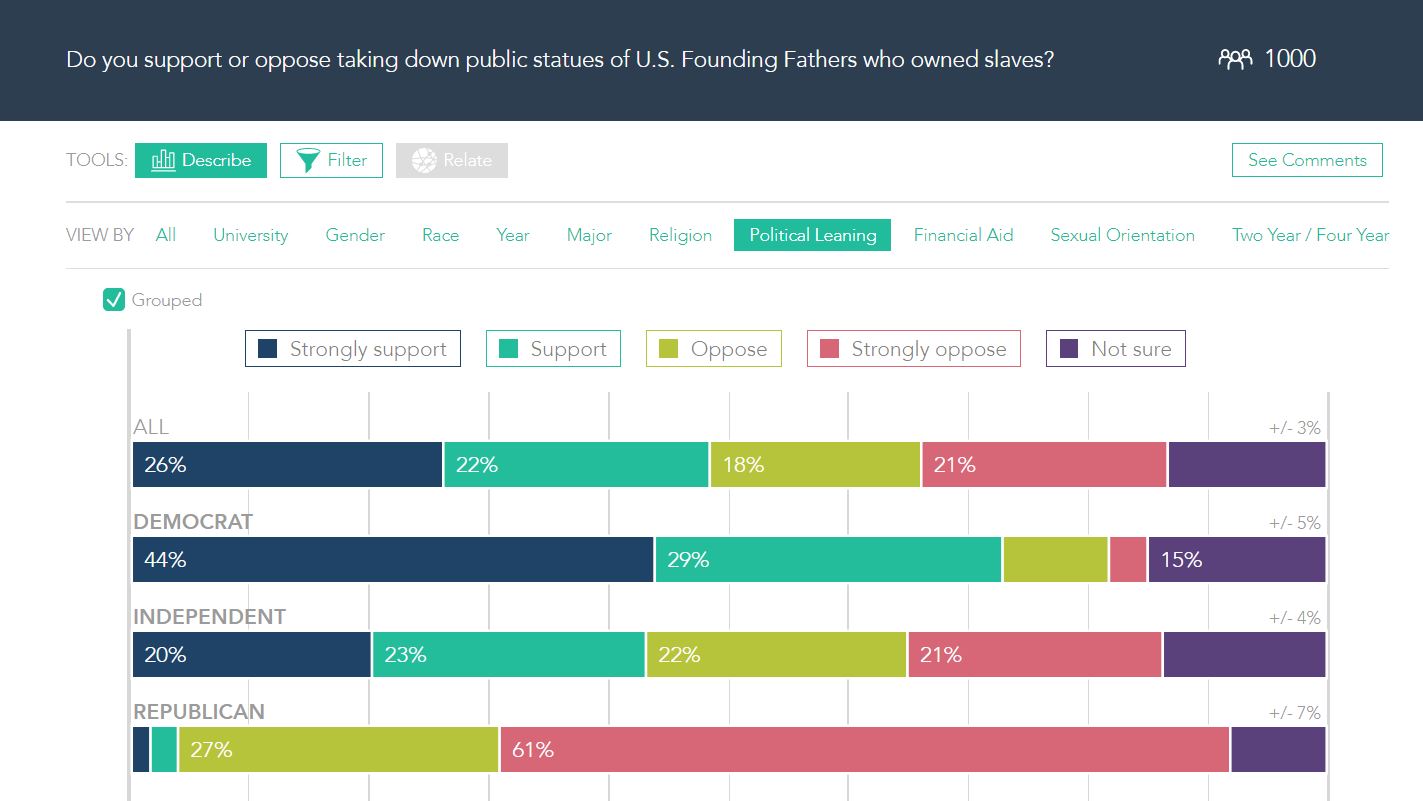 Independent students were almost evenly divided on the issue.

Overall results found that 48 percent of college students are in favor of taking down the statues, 39 percent are opposed, and 13 percent are not sure.

The poll was facilitated by College Pulse, a survey and analytics company focused on college students. Fielded July 26 and July 27, the margin of error is plus or minus 3.5 percent.

The poll question was asked in the wake of some Black Lives Matter and Antifa protesters tearing down statues deemed racist by today’s standards.

Statues of both Washington and Jefferson were pulled down in June in Oregon. The one of Jefferson had the phrase “slave owner” spray painted on it before it was toppled, The Hill reports.

The vandalism has prompted a national debate that extends beyond the controversy over Confederate statues into questions of whether the Founding Fathers deserve to be honored.

Rosario Navalta, 21, a senior at Hofstra University in New York, told The Washington Post she is leading a “Jefferson’s Gotta Go!” campaign to remove a sculpture of Jefferson from her campus because “There is no point in having these statues.”

“All they do is remind everybody of the history of the United States and its role in perpetuating white supremacy and the institutionalization of anti-blackness.”

For Immediate Release: Our Demands. https://t.co/g2dumqByth

As of July 3, 2020, these are the demands of the Jefferson Has Gotta Go! Campaign. These demands have been shared with University administrators and the members of the Committee on Representation in Public Spaces.

President Donald Trump stepped into the fray when he tweeted about vandalism against statues of George Washington.

“We are tracking down the two Anarchists who threw paint on the magnificent George Washington Statue in Manhattan. We have them on tape. They will be prosecuted and face 10 years in Prison based on the Monuments and Statues Act. Turn yourselves in now!” the president tweeted June 30.

No, Radical Left anarchists, agitators, looters or protesters will not be knocking down or harming the Washington Monument, the Lincoln or Jefferson Memorials, or just about any other Federal Monumrnt or Statue. If they even try, an automatic 10 years in prison. Sorry!

In mid-July Trump also tweeted: “No, Radical Left anarchists, agitators, looters or protesters will not be knocking down or harming the Washington Monument, the Lincoln or Jefferson Memorials, or just about any other Federal Monumrnt [sic] or Statue. If they even try, an automatic 10 years in prison. Sorry!”

But Fox News poll respondents under 30 were more likely to say they should be taken down, at 30 percent, compared to 47 percent who supported keeping them up. A stark divide was also found between Republican and Democratic respondents as well: 26 percent of Democrats said take them down while only 7 percent of Republicans did.

As for The College Fix poll, the sample was drawn from College Pulse’s undergraduate pool that includes over 270,000 verified students representing more than 900 different colleges and universities in all 50 states.

When the College Fix poll results are broken down by race, black students are the most likely to support taking the statues down.

Kansas State University: They did have good values. Don’t look at them for their slave ownership, that was common at the time. But also don’t ignore the fact that they had slaves.

UW Whitewater: The founding fathers did some good things. They also did some bad things.I don’t see why we need to memorialize them.

Worcester Polytechnic Institute: We don’t expect these people to be perfect, we expect them to be excellent. And by the way, Washington freed his slaves after his death and so did Jefferson (not all, but some). Would you support taking down MLK’s statue because he was homophobic?

Penn State: Owning slaves is not what made the Founding Fathers exceptional. They pledged their lives,their fortunes, and their sacred honor in order to establish a nation dedicated to ideals and supported by institutions diametrically opposed to the evils of human nature such as slavery and tyranny. Without their monumental contribution to human liberty and flourishing, our nation and the world would be a much darker place. We must never take for granted the work they did, the road they paved, but most importantly the duty we inherit from them to fulfill and refine the ideals and institutions they bestowed upon the world.

The College of New Jersey: Owning slaves was obviously wrong but that is not what their legacy is based off of, which is the key difference between statues of them and confederate statues.

Cornell: States banned people from educating slaves and TJ raped and had children with a 14-year old slave named Sally Hemmings. And George Washington barely fed his slaves and used their teeth for dentures.

UT Arlington: The founding fathers are not remembered for owning slaves. They are remembered because of their leadership and achievements creating this country. Unlike the confederates, who are specifically remembered for betraying us to keep slavery.

Agnes Scott College: These comments are like “They were good!!! Except for the tiny tiny fact that they pretend to own people and abused them!!! Other than that! Perfect.” stfu enslaving people is never excusable.

Oklahoma: Some FF never really had a fair chance to refuse owning slaves. For example, George Washington’s dad died when he was 11, and he inherited his first slaves from him. That is far too young of an age to fully understand and grasp just how horrible slavery was, especially when he had been conditioned as a child with having slaves around all the time. Luckily, he became enlightened later on and grew to despise the institution of slavery, even freeing his slaves upon his death. Men like GW must be remembered not for their ownership of slaves, but for the contributions they made to this country that would eventually lead to a far more free nation. Without the influence of our Founding Fathers, who knows how much longer slavery would’ve went on?

Clemson: Ok if we took down all the statues of founding fathers who owned slaves or were associated with being a part of slavery then there would be none left.