A whopping 94 percent of Democratic college students surveyed recently responded that they support defunding the police, according to a recent online College Fix poll of 1,500 college students nationwide.

What’s more, 61 percent of Democratic college students polled responded that rioting and looting are legitimate forms of protest against racial discrimination and police brutality in America today, the results show.

The online survey asked two questions: “Do you support or oppose defunding the police (i.e. cutting police budgets to fund other community resources)?” and “Are rioting and looting legitimate forms of protest against racial discrimination and police brutality in America today?”

Question one results by political leaning: 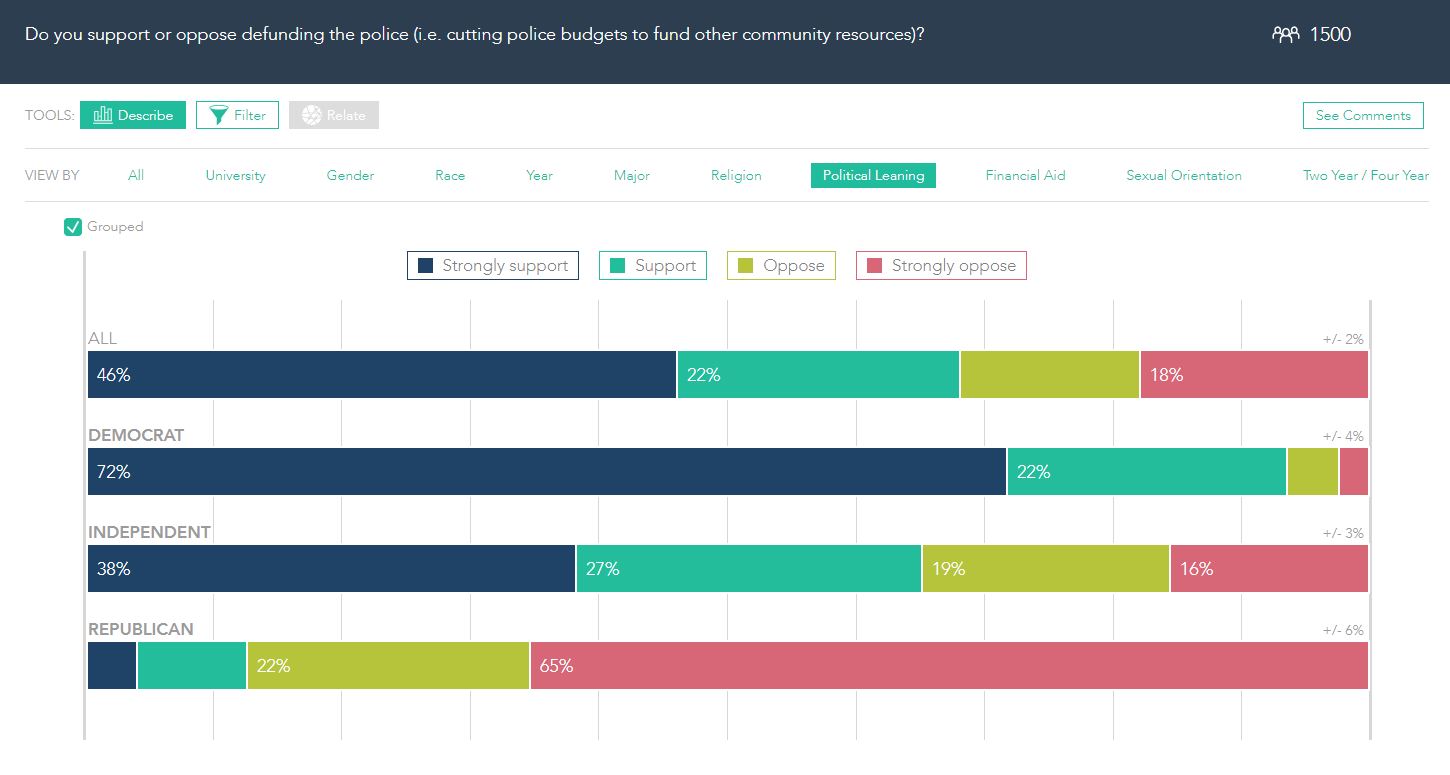 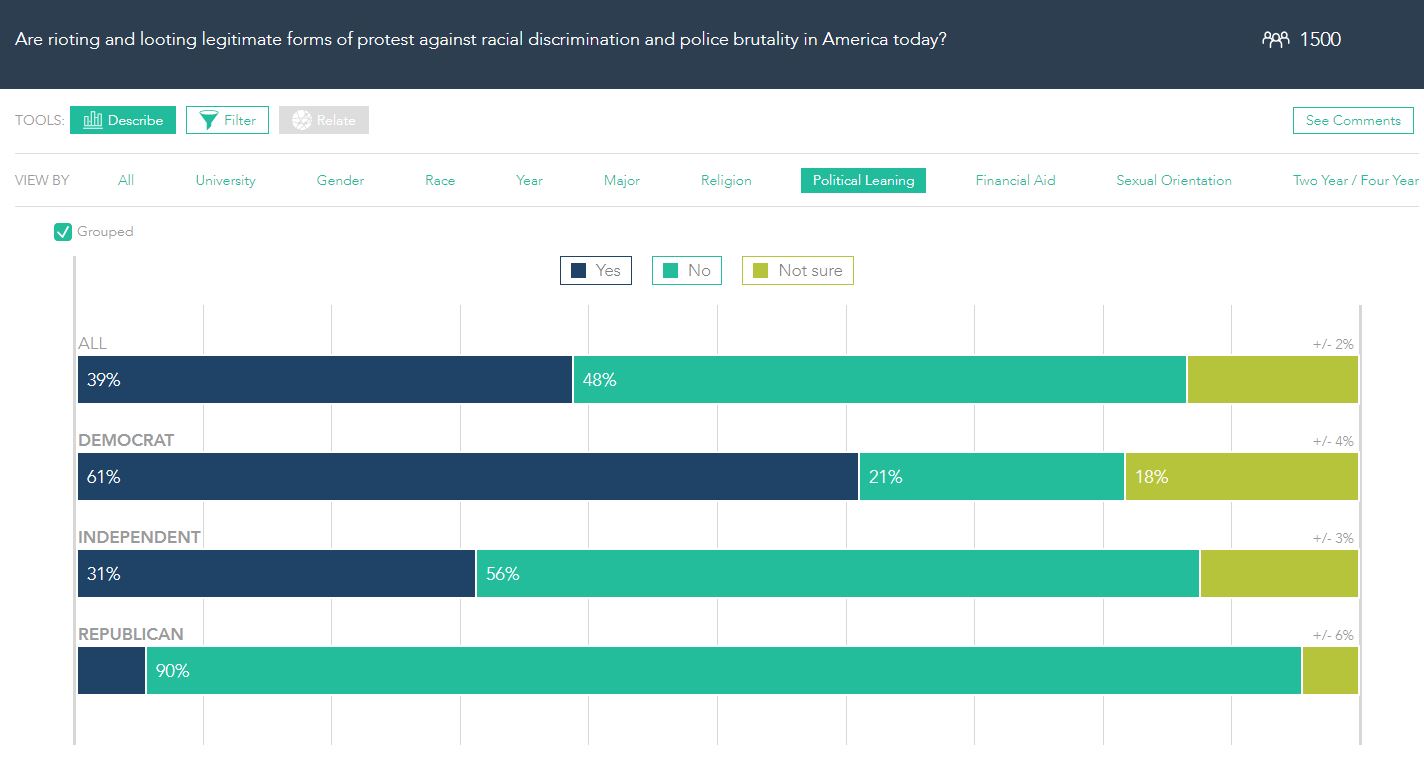 The poll was facilitated by College Pulse, an online survey and analytics company focused on college students. Fielded June 17 and June 18, the margin of error is plus or minus 3 percent.

The sample was drawn from the company’s undergraduate pool that includes over 270,000 verified students representing more than 900 different colleges and universities in all 50 states.

When the results are broken down by race, the highest percentage of students who support defunding the police are African American at 89 percent. Black and Latino students are also more prone to agree that rioting and looting are legitimate forms of protest, at 52 percent and 50 percent, respectively, the results show.

Question one results by race: 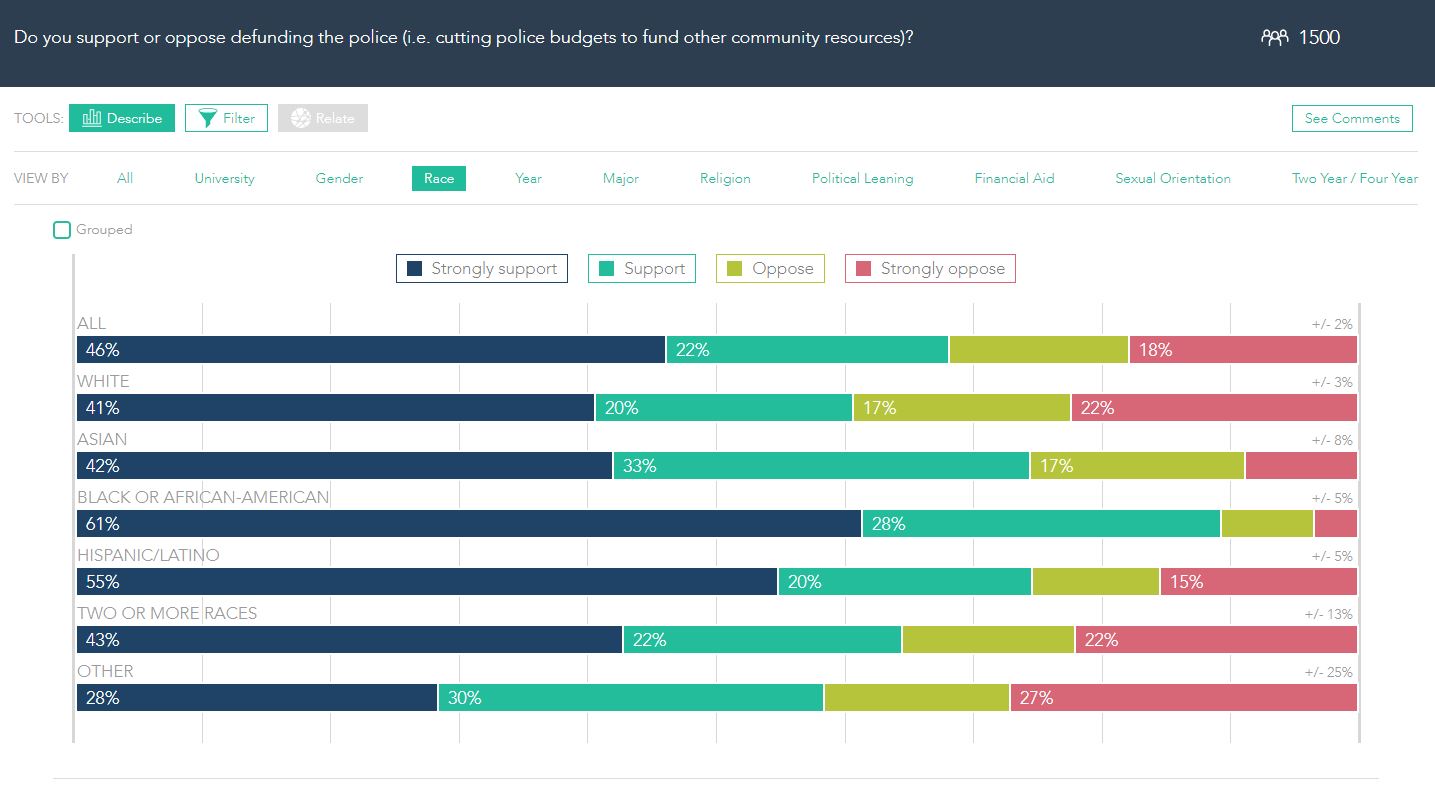 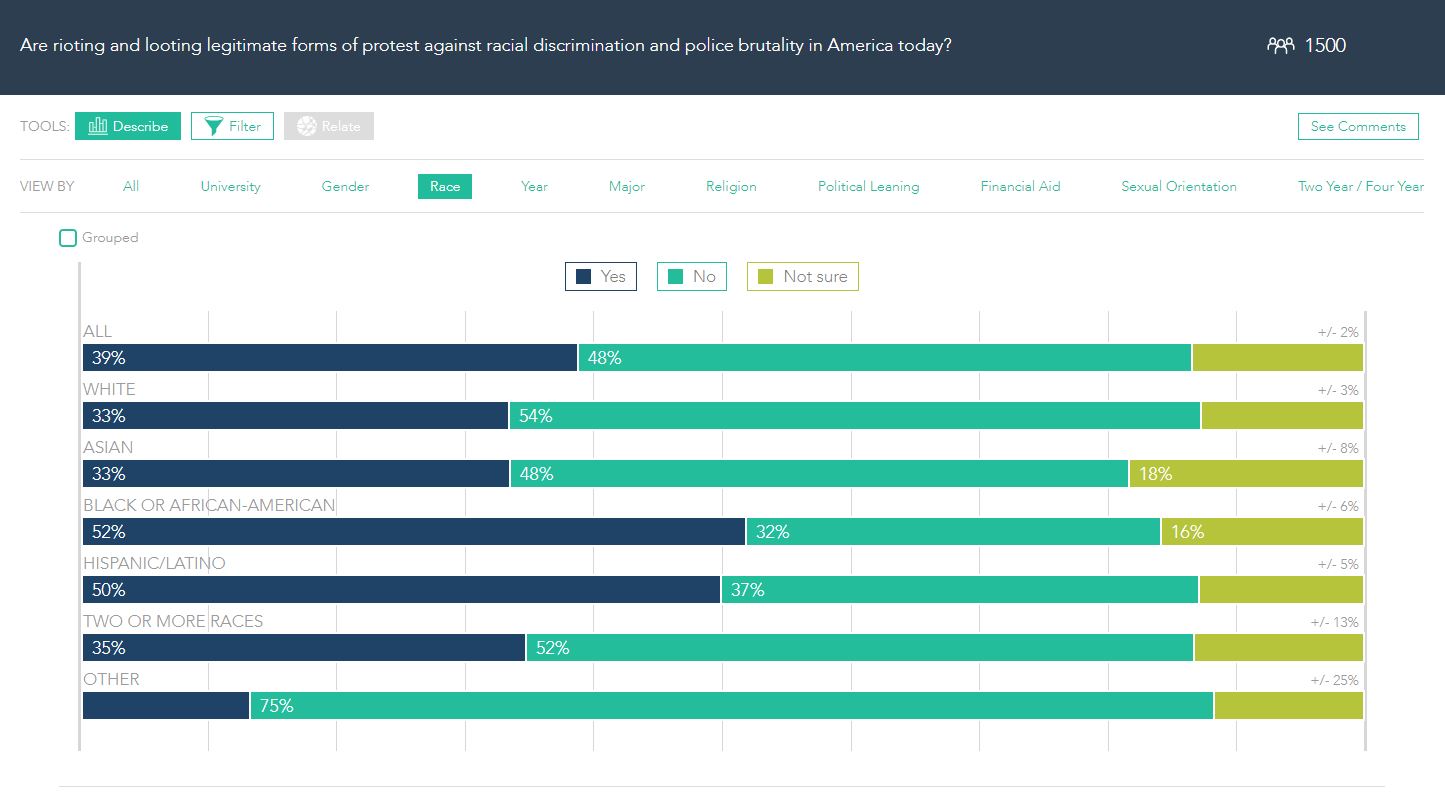 “I take a four year education and feel just barely qualified after working my ass off and these guys get to walk around with guns after a couple months? Nah. Defunding the police only sounds radical until you realize we’ve been defunding education for decades,” said one student from Seattle University.

Another student from the University of Alaska replied: “I’ve almost been killed a few times up here in AK because some cop was thinking I was some terrorist or some shit. ‘Omg. This person isn’t talking. They gotta have a car bomb!!!!’ When in reality I’m a fucking mute and tried telling him in ASL that I’m mute. But he called it in as gang signs.”

A University of North Carolina student also noted that “it is entirely possible to defund the police by investing more resources into other community programs/other professionals.”

Arguing that the notion “if you do not commit a crime, you will not have to interact with the police” does not take into account racial profiling, the student added: “Too many [people of color] especially black people have been pulled over or approached for no reason other than their skin color, and often that leads to escalation even when unprovoked. It’s not that simple.”

But other students are less convinced slashing police budgets is a good idea.

“If you cut the budgets, the quality officers will leave and training will only get worse,” said one student from University of Illinois at Urbana-Champaign. “It sounds good to say it, but it will only increase police brutality.”

Added another from the University of Dayton: “I am honestly very surprised after seeing how many people support defunding the police. As others have mentioned, you cannot make the police better by taking away funding. If you want better police and more specialized divisions of the police, they need more funds.”

A Miami University student put it this way: “Go ahead and defund the police you idiots. Crime will only go up. It’s literally the worst thing you can do.”