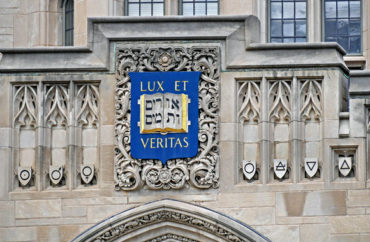 ‘It’s she-said versus what the evidence says’

Saifullah Khan, the Yale student expelled for alleged sexual misconduct despite having been cleared by a criminal court, has appealed his expulsion to the university, he told The College Fix.

Last March, Khan, was found not guilty by a New Haven, Conn. court on four counts of raping a fellow student on Halloween 2015. Yet on Jan. 2, Yale expelled the 25-year-old from its campus following its own investigation into the alleged sexual assault.

The two outcomes highlight the drastically different standards used by criminal courts and universities in determining guilt in sexual assault cases, and gives further ammunition to those arguing university-led sexual assault processes often violate the due process rights of the accused.

“This isn’t ‘he-said-she-said,’” Khan told The Fix in a phone interview. “It’s ‘she-said versus what the evidence says.”

Khan was temporarily banned from Yale’s campus after he was initially arrested in November of 2015. But that banishment was made permanent early  this year when the Yale University-Wide Committee on Sexual Misconduct expelled the student after finding him responsible for the sexual assault for which he had recently been cleared in court.

Yet during the two-week criminal trial, the six-person jury only deliberated for three hours before clearing Khan of all charges of sexual misconduct. At the time, juror Diane Urbano told The New York Times that there was “sufficient doubt on every charge,” therefore, “we came to the verdict we did.”

On Halloween 2015, Khan met up with a female student who had been drinking. The two made their way back to her room, where she testified she passed out, only to allegedly find Khan having intercourse with her when she awoke. Arguing she was too drunk to consent, she said she was surprised to wake up in the morning naked with used condoms on the floor.

Khan said that the woman had taken her own clothes off and initiated sexual activity. In court, his attorneys provided a security camera video of the two walking to the room together, arm-in-arm, which one juror said convinced him that the accuser may not have been as drunk as she later claimed.

During the criminal trial, the accuser took the stand and was cross-examined by Khan’s lawyers – a crucial step in ensuring due process is granted to the accused during judicial proceedings. In court, after hearing both sides, a jury must determine whether the state has proven its case “beyond a reasonable doubt.”

MORE: I sat through the entire Khan trial. The media aren’t giving you the full story.

Saifullah Khan was found not guilty of sexually assaulting a fellow student. But now a Yale University committee is holding hearings about his conduct to determine if he'll be reinstated to the school. https://t.co/uQvGBJDkvL pic.twitter.com/eGtEhfYYNp

No record of Yale hearing, no lawyer, no cross-examination

Yet the Yale committee only had to adhere to the “preponderance of the evidence” standard, mandated by the Obama administration’s Department of Education, which requires a slightly better than 50 percent likelihood that the accused committed sexual assault.

Under Yale process, Khan’s attorney was unable to cross-examine his accuser, so the committee was unable to hear many of the inconsistencies in her story that Khan’s lawyer had unearthed during the criminal trial. During the Yale hearing, Khan was only allowed to bring a “counselor” who was unable to speak or provide legal advice during the proceedings.

The hearing was not recorded, so there was no permanent record of what was said, and the accuser was not present at the trial, instead videoconferencing in via Skype. According to his attorney, Khan wasn’t even allowed to be in the hearing room when his accuser gave her account over the internet, instead having to listen via intercom from an adjoining room. “The only time we were allowed into the hearing room was when they were questioning me,” Khan said.

On December 14, the committee issued its 17-page report stating conclusively that the accuser was too inebriated to consent to sexual activity and therefore Khan had assaulted her. At Khan’s criminal trial, however, the accuser’s level of intoxication was alternately described as “four” and “11” – on a 10-point scale – by different prosecution witnesses. The witness who gave the higher estimate, a trained emergency medical technician, nonetheless said the accuser didn’t need help because she “appeared oriented to time and place,” according to a trial audience member.

Khan then offered his own 17-page response to the committee, answering many of the things in the university’s report that were factually incorrect or taken out of context. Many of these inconsistencies had been discussed during the criminal trial. Nonetheless, on Jan. 2, Khan was notified he had been expelled.

Khan filed an internal appeal with Yale on Jan. 11, and if that fails, his attorney has vowed to challenge the ruling in federal court. But the odds of Khan ever being able to return to the university seems small given the animus built against him on campus. After he was cleared of the charges in court, over 75,000 people signed a petition to have “the rapist” barred from Yale.

An investigation into an allegation of sexual assault levied against Saifullah Khan ’19 — which helped prompt Yale to issue an emergency suspension of Khan in October — was dropped by the District of Columbia’s Metropolitan Police Department on Tuesday.https://t.co/bukufwSImx pic.twitter.com/CgAtuXmUDw

Khan doesn’t believe the summer incident was behind his fall suspension, however. It was the result of the university caving to the demands of student protesters during the Brett Kavanaugh Supreme Court nomination fight, in which Kavanaugh was accused of sexual misconduct while a student at Yale, he said.

“You could feel the tension in the air – I wasn’t able to go to class,” Khan said of the time on campus during the Kavanaugh controversy. Though he stuck to his set schedule and “avoided interaction” with other students, if he was spotted on campus, it was common for other students to announce his whereabouts on social media.

Despite his travails, Khan, who was born in Afghanistan, said that his time back on campus wasn’t “as bad as living in a refugee camp.”

“My experience having been across many states is that America is a beautiful country with a lot of good people. I’m not bothered by random crazy kids,” he said.

Last fall, Education Secretary Betsy DeVos* issued a proposed Title IX regulation for university sexual misconduct proceedings. The proposal, which is currently working its way through the rulemaking process, would apply basic due process protections for students, including “a presumption of innocence throughout the grievance process; written notice of allegations and an equal opportunity to review all evidence collected; and the right to cross- examination, subject to ‘rape shield’ protections.”

Yale has not yet responded to Khan’s appeal.

MORE: Yale let accusers text each other to coordinate testimony against male