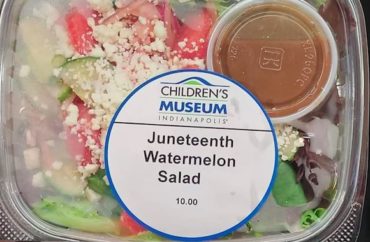 Some black academics aren’t particularly happy about how assorted companies and institutions are celebrating the fledgling national holiday known as Juneteenth.

The holiday, which celebrates the emancipation of American slaves, was officially recognized by President Biden a year ago.

According to CNN, certain “organizations and major retailers” have been informed of their allegedly “tone-deaf” efforts to highlight the commemoration, such as an Indianapolis museum’s offering of a “Juneteenth watermelon salad.”

The museum apologized, but said it “routinely relies” on a vendor to provide “thematic” food offerings.

“People were very offended by it,” teacher Cherlisa Starks-Richardson said, and added that watermelon is a “racist trope.” “[W]e don’t need the food. I want education. I want people to understand the purpose of (Juneteenth).”

Elsewhere, Walmart got heat for a “swirled red velvet and cheesecake flavored ice cream” and Dollar Tree for its Juneteenth-themed paper plates and napkins (pictured). 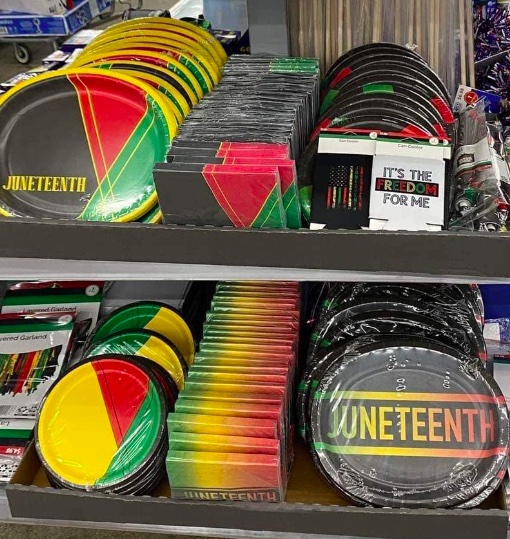 Howard University’s Stephanie Leonard, a specialist in workplace diversity, equity and inclusion, said it’s wrong for companies to profit off of Juneteenth if they don’t have a history of “supporting and being inclusive of those communities.”

Corporations, she said, can be more thoughtful in how they honor Juneteenth by doing more research and appointing a Black-led committee that is invested in educating the public about the holiday. She called it “tokenism” when companies rely solely on one or two Black employees to decide how Juneteenth should be marked.

“It’s tough for organizations to put forth an ice cream or watermelon salad without having done the prior work,” Leonard said. “Because it just comes off as performative, as a last-ditch effort. It does not come off as this organization values its Black employees or values its Black customers.”

Former University of South Carolina professor Lauren Tucker added that efforts like Walmart’s and Dollar Tree’s are just “checking a box” and not giving Juneteenth the “research and care it deserves.”

Tucker, now an “inclusive leadership consultant,” added “[W]ithout contextualizing these foods, by the context, the history, you are just perpetuating more pain, more frustration and signifying that you don’t really understand or care about the history.”

Professors J. Luke Wood and Frank Harris III of San Diego State University might consider these Juneteenth commemorations an example of “racelighting,” or “when statements of solidarity are released without an authentic commitment to diversity, equity, and inclusion.”

Nevertheless, a Twitter search of “Juneteenth watermelon” provides some interesting results. For example, a children’s trauma treatment agency posted that it celebrated Juneteenth on Friday with “a staff potluck filled with delicious food like fried chicken, cornbread, ribs, watermelon and several kinds of sweets.” A black gentleman wrote that he was inspired by the colors of the Pan-African flag to (like that Indianapolis museum) consider making a watermelon salad.

Another posted about the intriguing origins of the watermelon and fried chicken stereotypes and their connection to Juneteenth.