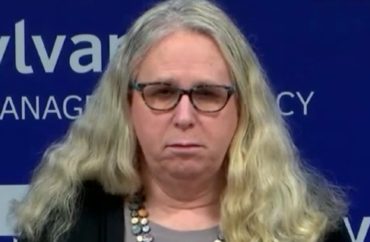 ‘I spoke the truth,’ professor says

A transgender activist wants the University of Dallas leadership to “consider the judgment, character, and fitness” of a professor at the Catholic university who criticized a transgender appointee of President Joe Biden.

Bethany Beeler wrote an open letter in January addressed to the trustees, faculty senate, provost and university president about the Facebook comments of Professor David Upham. Beeler graduated from the Catholic university and has children at the school now, too.

Upham had criticized Biden’s appointment of Rachel Levine (above), a biological male who identifies as a woman, to a position with the federal Department of Health and Human Services.

“Dr. Levine is to now be called a ‘woman’ and to appointed (sic) the Secretary of the Department of Health and Human Services,” Professor David Upham wrote in a since-deleted post on his personal Facebook page in January. 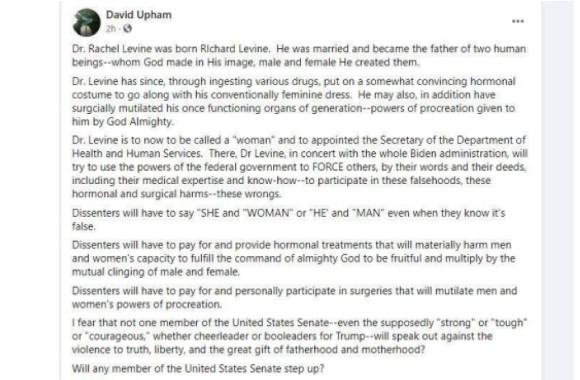 Levine served as Pennsylvania’s health secretary before being selected to serve as an assistant HHS secretary in the Biden administration.

“There, Dr. Levine, in concert with the whole Biden administration, will try to use the powers of the federal government to FORCE others, by their words and their deeds, including their medical expertise and know-how to participate in these falsehoods, these hormonal and surgical harms–these wrongs,” the political science professor said.

The professor then asked if any U.S. Senators would stand up against the appointment, presumably by blocking Levine’s confirmation.

Levine’s confirmation is still pending as of February 15, according to an appointee tracker by the Partnership for Public Service.

Upham’s comment drew criticism from Beeler, though the activist did not explicitly ask for an investigation or the professor’s termination.

“I write to ask the Trustees, the Faculty Senate, the President, and Provost to consider the judgment, character, and fitness of Prof. Upham in his publicly posting these remarks which he has since scrubbed from his Facebook page,” Beeler wrote in an open letter.

“Is this the kind of behavior and person UD wants to place in front of children growing into young adults?” Beeler asked later in the letter.

Upham declined to comment via an email to The College Fix but did point to an article in the student newspaper that covered the controversy and quoted him.

“I was aware at the time that the post had generated negative reaction beyond my FB friends, but I wasn’t terribly concerned,” Upham told The University News.

“I spoke the truth. I did not lie,” Upham wrote in a follow-up January 24 Facebook post, according to the student newspaper.

Beeler did not respond to a direct question from The Fix on whether Upham should recant his statements or be fired. A second letter by Beeler said the activist did not want the professor fired but argued the university should “hold him accountable” for his statements.

“I would like to see the same regard for LGBTQIA+ persons’ safety and well-being that UD devotees accord to themselves,” Beeler told The Fix via email.

“If a UD professor on social media lambasted Catholics for being ‘deluded’ about the integrity of their Catholic identity, UD administration would swiftly (and justly) uphold the right of Catholic persons to be who they are,” Beeler said. “Why can’t the same be accorded to trans persons?”

The Fix also reached out to the University of Dallas for comment. The university declined to provide additional comment on the matter. Spokesperson Clare Venegas directed The Fix to a prior statement on Prof. Upham’s comments.

“As members of the University of Dallas community, we strive to combine robust, civil — and yes, charitable — discourse with a welcoming spirit, which expresses itself in solidarity with all members of our community,” the statement said.

“The university does not speak, or issue statements, [on] the personal social media sites or email correspondence of faculty and staff,” the university said in its statement.

The university is committed to providing working, living and learning environments free from discrimination, harassment and retaliation, and to promoting a Catholic vision of difference and unity, justice and mercy, precisely because we believe that every person has inherent dignity.

“I think the school responded well because they said they will stick to their policy on not censoring professors on their personal accounts,” Marcelle Van de Voorde told The Fix.

“The University of Dallas is indeed a Catholic university. That included standing up for doctrine and charity. I believe that standing up for the doctrine of the church is not easy, I’m proud of my school for doing that,” Van de Voorde said.