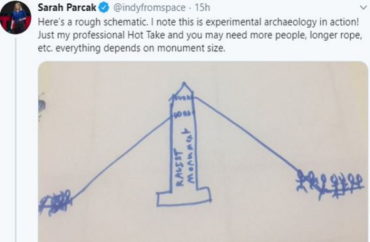 University of Alabama at Birmingham archaeology Professor Sarah Parcak posted Sunday on Twitter details on how a crowd of people could safely topple obelisks, complete with a little schematics drawing.

Parcak, an Egyptologist described as a “modern-day Indiana Jones,” posted the lengthy thread as racially charged protests, riots, looting and violence engulfed the nation and its capital, as well as the city of Birmingham, Alabama. Both D.C. and Birmingham have obelisk-shaped monuments.

Parcak, winner of the 2016 TED Prize whose “wish is to protect the world’s shared cultural heritage,” according to the organization, launched her anti-obelisks Twitter thread by calling it a “PSA” — public service announcement — then proceeded to fire off 13 posts with instructions, suggesting an obelisk “might be masquerading as a racist monument I dunno.”

Her thread included the message: “There might be one just like this in downtown Birmingham! What a coincidence. Can someone please show this thread to the folks there.”

The riot at the Birmingham park was among many across the nation in the wake of the police officer-involved death of George Floyd in Minnesota. The officer has been arrested and charged with murder.

On Sunday night, Birmingham demonstrators managed to damage, but not topple, the obelisk-shaped Confederate monument there.

Parcak’s instructions had suggested that for “every 10 ft of monument, you’ll need 40+ people.”

“… I recommend a rhythmic song. YOU WILL NEED SOMEONE WITH A LOUDSPEAKER DIRECTING. There can be only one person yelling. Everyone will be alternating on rope left right left right not everyone on the same side. No one else near the obelisk! Safety first!”

*might be masquerading as a racist monument I dunno

“Just keep pulling till there’s good rocking, there will be more and more and more tilting, you have to wait more for the obelisk to rock back and time it to pull when it’s coming to you. Don’t worry you’re 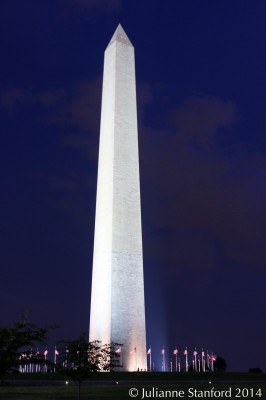 close!” she added. “… WATCH THAT SUMBITCH TOPPLE GET THE %^&* OUT OF THE WAY IT WILL SMASH RUN AWAY FROM DIRECTION. Then celebrate. Because #BlackLivesMatter and good riddance to any obelisks pretending to be ancient Egyptian obelisks when they are in fact celebrating racism and white nationalism.”

She also noted in her thread it was meant to be “entirely hypothetical,” adding in all caps not to pull down the Washington Monument.

The College Fix on Monday reached out to Parcak and the University of Alabama at Birmingham for comment.

Parcak has yet to respond.

Tyler Greer, a spokesman for the university, said in an email Monday to The College Fix: “These are not the opinions of the university. Our 45,000+ students, faculty and staff often use social media to express thoughts that do not necessarily reflect the voice of the university.”

The major of Birmingham, Randall Woodfin, has since announced that he will work to have the Confederate obelisk damaged Sunday night by rioters permanently removed from the park at some point in the future, according to local news reports Monday.

Meanwhile, the top tweet of the professor’s thread has been liked nearly 60,000 times — although one of the top comments on the thread cites a law that “makes it a federal crime to use any facility of interstate commerce, like the internet, to aid or abet participation in a riot.”

Parcak’s faculty bio notes she is something of a celebrity in her field.

“Sarah has worked with NASA and the US State Department, and has collaborators across the globe. She has given 150 talks to a range of audiences worldwide,” it states.

Editor’s note: The post has been updated with a statement from the university.

INSIDE IMAGE: Stanford / For The College Fix