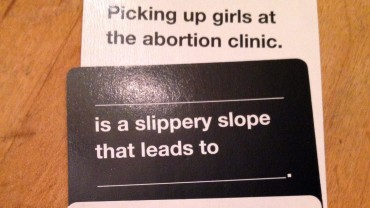 News flash to campus administrators: You can give boneheads a fair hearing before meting out the most severe punishment against them without losing your moral authority.

Bucknell University in Pennsylvania apparently thinks the University of Oklahoma is a good role model for due process: It expelled three students for horribly offensive speech on a campus radio show without even giving them a hearing.

[University President John] Bravman sent an email to faculty on Monday about the expulsion, which included the students’ comments. When one student said “niggers,” a second student said “black people should be dead,” and the third student said “lynch ‘em.”

[University spokesman Andy] Hirsch said the three students failed “to act in a manner that reflects maturity, social responsibility and respect toward the person and property of others,” which is a violation of the student code of conduct. The students were expelled under administrative action, which allows university administrators to take action against a student without a formal disciplinary hearing if the student proves a threat to the well-being of the university community.

What the hell kind of Orwellian language is that? Here’s more:

“When we’re talking about comments and speech that involve hate speech that’s interfering with the rights of others,” Hirsch said, “then we’re left with no choice but to take appropriate action, and that’s what we did.”

Here’s the relevant section of the student code in context:

i. Engaging in conduct that threatens the health or well-being of another.

ii. Sexual misconduct or relationship violence. Violations of the University’s Sexual Misconduct and Relationship Violence policy (see pg 20) are subject to disposition according to that policy.

iii. Physical abuse, injury, constraint on another’s physical movement, or threat of harm toward another person.

iv. Harassment, which includes engaging in conduct that, in the view of a reasonable person, has the purpose or effect of creating an intimidating or hostile educational, work, or living environment.

Bucknell is a red-light university for its speech codes under the Foundation for Individual Rights in Education’s analysis, by the way.

As disgusting as those students’ remarks were, and stupid as they were to broadcast, they weren’t directed toward anyone in particular and are almost comically overbroad – the kind of thing that immature students (or drunks at a bar) would say, just for the offensiveness of it, with no larger purpose.

Had the school decided to give them a hearing, perhaps the students could have explained it was just incredibly poor judgment, not actual intentions to kill black people. Their comments don’t sound like anything you wouldn’t hear in a typical game of Cards Against Humanity (whose creators know how to buy themselves great PR).

I don’t know if President Bravman is a player himself, but I bet if you mic’d him up during a good ol’ boy poker game with whiskey and cigars, he’d be bribing you to destroy that recording.

Or just expel you for threatening the community’s well-being.