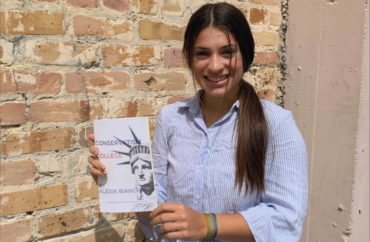 A self-described “Army brat,” Alexia Bianchi’s father is a colonel in the U.S. Army, and she attended 10 different schools growing up, including three separate high schools, before enrolling at the University of South Florida.

On her mother’s side, Bianchi’s grandparents fled Cuba, which she said “really made me appreciate all the freedoms and opportunities we have in America.”

Underscoring all this, she was raised Roman Catholic, a faith she carried into college, she told The College Fix in a telephone interview.

Bianchi, 20, is a leading conservative voice at the University of South Florida, most recently self-publishing a book in March titled “Conservatism and College: How College Campuses Have Become Liberal Indoctrination Sites.”

The book “examines the reasons why colleges push a leftist agenda and it describes the consequences of doing so,” its online description states.

“My book is about everything I have seen happening, and suggesting ways to try and fix that,” Bianchi said.

So far she’s sold over 300 copies, she said, adding the book offers advice to peers on how to best approach difficult conversations on campus.

“You are going to be surrounded by left-leaning students, act respectfully, because they are going to associate how you act and behave with how a conservative is,” she told The Fix. “If somebody is yelling at you, try to make decent arguments while maintaining that level of respect.”

Bianchi, a psychology major, said she was inspired to write the book after she was not allowed to showcase her studies on Borderline Personality Disorder at the Harvard Women in Psychology’s Annual Trends in Psychology Summit, held online in November 2021.

Bianchi self-published a book on Borderline Personality Disorder in 2021, but while summit attendance was open to all, she was not allowed to present. Organizers had explained that “to highlight the work of underrepresented genders, oral presentations and posters will be restricted to underrepresented genders (e.g., female identifying, transgender, nonbinary, and other gender minority.”

Bianchi, a senior set to graduate this year, told The College Fix the experience of being blackballed from the summit prompted her to write the “Conservatism and College” book.

“I was really angered by it. I actually wrote a letter to Governor [Ron] DeSantis about it,” she said, adding she still hopes to hear back from him.

“I’ve actually had a lot of issues on campus,” she said. “I have had students tell me I am sexist or racist.”

In particular, she cited an incident in which she was yelled at and called racist by peers when she argued in class that violent protests are not the answer to social injustice, she said.

As a member of the USF College Republicans, she said she was also stymied by campus politics when her group was not allowed to table at the weekly “Bull Market” student showcase.

“We were denied permission multiple times because they said our club was controversial,” she said, adding the young GOPers refused to be cowed and finally got permission to table earlier this year.

As vice president of the Network of enlightened Women chapter at USF, Bianchi is not one to be silenced. In February, the NeW student group hosted her grandmother, Martha Lezama, who fled Cuba with her family at age 12 and is also an alumnus of the University of South Florida.

“She spoke to NeW at USF via zoom and told stories about her life in a communist country where she could not practice her religion and lived in constant fear,” Bianchi told The Fix. “She pointed out that Castro had many supporters before he took power and warned us that socialism is a stepping stone to communism.”

“She is an effective advocate for freedom on campus, a place where this advocacy is sorely needed,” Agness Lips told The Fix. “She sees the problems on campus and tackles them in a compelling way.”

Bianchi may run for Congress one day, and is drawn to law school and a life of civic service, she said. After graduation, she will work as operations director for Florida Attorney General Ashley Moody.

MORE: She came out as conservative at Harvard. It went better than expected.