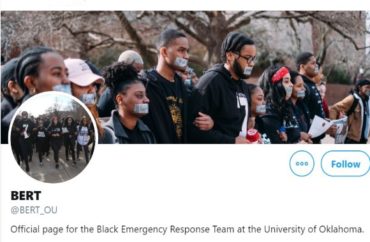 In the fall of 2015, protesters accused University of Missouri leaders of flippancy regarding racism. They made demands. They enacted a hunger strike. They staged sit-ins. The protest made national headlines — and led to the resignation of University of Missouri System President Tim Wolfe and Mizzou’s Chancellor R. Bowen Loftin.

Right now at the University of Oklahoma, that exact formula is underway once again.

Two professors recently used the n-word inside the classroom, and as a result, protesters calling themselves the “Black Emergency Response Team,” or BERT, have issued a set of demands — most notably calling for the resignation of Provost Kyle Harper, who they allege allows racism to fester on campus. The mostly black student activists also want mandatory diversity training for faculty and a new multicultural center.

At one point they also demanded a Popeyes restaurant, according to The Oklahoman, but their online material does not mention that now.

The students have begun a hunger strike and have pledged not to leave the administration building they are occupying until their demands are met. Using the hashtag “#HarperHasToGo,” the activists are spreading claims about the scholar online.

The university needs to listen to these students putting their health on the line. @BERT_OU
#TheHateyOUHire pic.twitter.com/npUxhcJR8q

The protest began after a history professor, who has now been identified in local news reports as Kathleen Brosnan, said the n-word out loud multiple times as she read from a historical document. She had given a trigger warning prior to reading it. She has also since apologized.

The incident came on the heels of another OU professor using the n-word in a different context. In that case, a journalism professor compared “OK, boomer” to the n-word. That professor, Peter Gade, apologized and has stepped down for the rest of the semester and agreed to attend racial sensitivity courses.

The university’s interim President Joseph Harroz Jr. has apologized for both incidents, calling them unacceptable, and pledged to require all faculty to undergo diversity training as well as plans to launch some sort of restorative justice program.

All this is not enough for the protesting students at OU, who want Harper’s proverbial head on a platter.

Much of the incitement against Harper seems to be led by Professor Suzette Grillot, who was terminated as OU’s dean of the College of International Studies last year but remains a tenured professor.

Grillot, who has been openly hostile to campus administration, accused Harper on Twitter of covering up a sexual assault allegation as well as sexism and microaggressions.

One of the most egregious and difficult issues I had to deal w/during my time as dean of international studies was the removal of an OU faculty member after they raped a student on a study abroad program. And this is a primary reason why #HarperHasToGo. A thread…

During a Presidential Professorship committee meeting one year, a committee Harper chaired, I made the case that the committee should select a woman or two given that after several rounds of discussion, only men had been selected. A member of the committee asked me “why?”….

As a female dean, I heard a number of sexist micro-aggressions from Harper over the years. For example, when setting up a discussion of freshman retention Harper would say “success has a thousand fathers” to indicate that this was a collective effort (of the men, apparently)….

Another person on Twitter weighed in on the assault claim.

This student was me, and that is one of the reasons why #HarperHasToGo

When I came back to the US, I had to beg him for a meeting in order to understand why he accepted the resignation letter of that professor without waiting for the final results of the investigation! https://t.co/Bnd26M8fIz

The activists are also spreading a talking points memo listing grievances against Harper, including that he criticized gender studies once as a student at OU in 1999, as well as accusing him of being silent when black students have lodged protests at the school.

It’s unclear if administrators will buckle under this public pressure.

Harper is highly admired among many of his peers. He attended OU as an undergrad and earned his Ph.D. at Harvard. He is the author of three prize-winning books and has been credited with helping to balance the budget at OU. He also remains a professor of classics in addition to his provost duties, and teaches a class on the origins of Christianity that is very popular among students.

The OU Daily reported on Tuesday that “Harper released a statement saying his office would work to make students feel comfortable while also working to ‘honor the fundamental boundaries of the First Amendment.'”

Meanwhile campus administrators are allowing the BERT activists to spend the night in Evans Hall to continue with their protest.

The OU Daily reports that campus administration put out a statement late Wednesday that read in part: “We join with OU’s concerned and hurt students, faculty, staff, alumni, and friends, and we echo the need for equal respect for everyone. Our community has experienced incidents in the last two weeks that have certainly caused pain, but more importantly have been reminders of trauma caused by racism and structural issues both past and present.”

“We identified areas of agreement that will move our University forward. We have agreed to continue these discussions. We will also advance these conversations with other student, faculty, and staff leadership,” the statement added. “Strong communication and actions — not merely words, press events, or public statements — are the only path to a better tomorrow. Together, we can achieve permanent change, and we are committed to doing just that.”