Students should pledge to ‘educate’ themselves on ‘implicit biases’

Students at Assumption University in Massachusetts have been asked to take a pledge to be actively anti-racist.

An email from the Catholic university’s student government asked students to “pledge to actively be an anti-racist student.”

The pledge, seen in an email obtained by The College Fix and also printed in the National Review, includes a number of statements that students are asked to affirm as part of the pledge.

“I pledge to educate myself on my own implicit biases,” the statement said. “I pledge to think critically about institutional racism and to fight back against microaggressions on campus.” 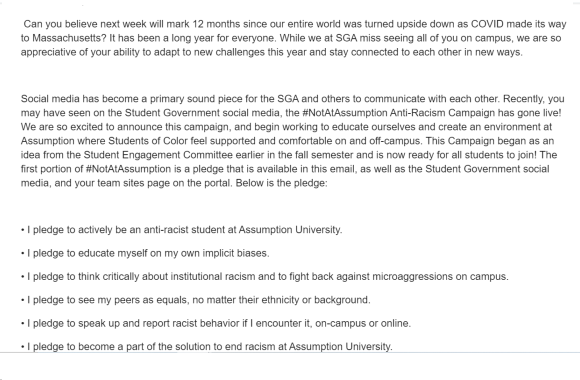 The pledge page can only be seen by Assumption students, but the university revealed at least some of the content in its email.

The university said that the goal of the anti-racism campaign is to educate students and faculty as well as create a safe environment for students of color.

University said it is voluntary

University officials worked with student government, “to ensure that resources being shared as part of the pledge will include a genuine diversity of views,” spokesperson Michael Guilfoyle told The College Fix via email. It was not behind the pledge itself.

The university said students can express their beliefs without fear of censorship. The university believes if academic freedom is expressed “freely and civilly,” the university will continue to exemplify the “animating purpose of Catholic liberal education,” Guilfoyle said.

Assumption said that it worked with the student government to ensure that the anti-racism pledge was voluntary, and the names of the students will not be displayed.

“As a community committed to diversity in every sense, Assumption unequivocally condemns racism,” Guilfoyle said. “We will not tolerate it on our campus or in our community.”

In addition to the university’s statement, the spokesperson said that “this pledge was a student-led initiative.” Thus, “no one is required to sign this pledge.”

The pledge calls for students to be anti-racist, educated on their own “implicit biases” towards different races, and report racist behavior if ever encountered.

The pledge also has resources to define concepts, such as implicit bias and police brutality.

“There is also a link to where you can report incidents of racism on campus,” the email said.

After students sign the anti-racism pledge, they are expected to uphold the pledge’s values and hold themselves and other students accountable “to be an actively anti-racist Assumption student.”

At the end of the announcement to its students, Assumption said that “it is all our jobs to create an environment where students of color are proud to be Assumption students.”

Signing the pledge is the first part of the campaign. The second part of this campaign will begin in a different form, such as books of the month and events at the university.

The College Fix contacted Assumption’s Democrats and Progressives twice via Instagram, but received no response. The Fix asked the campus Democrats via Instagram if it planned to encourage its members to sign the anti-racism pledge and what it hoped would be accomplished with the pledge, but did not receive a response.

Mount Wachusett Community College students hosted an event in 2019 where they recited an anti-racism pledge.

MORE: Professor challenges president to resign and give his job to a black person

Editor’s note: This article has been updated to clarify that the school did not use the phrase “colored students” and that the university was not behind the pledge. The pledge was promoted by the student government and the headline has been changed to reflect that.