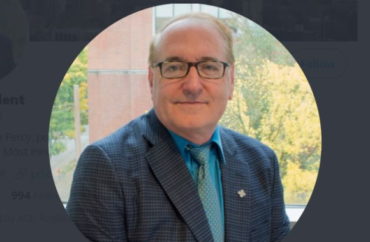 On Jan. 4, the president of Portland State University sent a memo to the campus community.

“Defining our next quarter century is the work of all of us, but as PSU’s President, I will be guided by three strategic directions,” wrote President Stephen Percy (pictured).

“My highest priority is sustaining and amplifying our commitment to racial justice. PSU is Oregon’s most diverse university and our actions must honor and harness the power of that diversity,” Percy added.

“It is imperative that we collectively engage in conversations that support transformation and act to deliver on our desired future, recognizing that the work will be different based on our positionalities and identities.”

One of his employees, in response, challenged Percy to lead the way with actions, not words.

“If you’re sincere, @PSUPresident, and you actually believe your ‘highest priority is sustaining and amplifying our commitment to racial justice,’ why don’t you resign and offer your position to a black person?” tweeted Portland State University philosopher Peter Boghossian.

If you’re sincere, @PSUPresident,
and you actually believe your “highest priority is sustaining and amplifying our commitment to racial justice,” why don’t you resign and offer your position to a black person?

In a statement to the Daily Caller, Professor Boghossian doubled down on this comment.

“There are real true believers in this ideology. This is a genuine question if he believes this,” Boghossian said. “Why hire another white dean? Every person should ask that.”

Boghossian is no critical race theory proponent. In fact, he is a leading critic of how leftist bias has infiltrated academia. He was one of the scholars who was able to get hoax papers published by scholarly journals a few years ago to prove his point that the academe trades respectability for ideological crusades.

Boghossian has also been on the receiving end of criticism. Earlier this year some “anti-racist” students at Utah State University protested his guest appearance, arguing that Boghossian, co-author of hoax papers such as one focused on “the conceptual penis,” would make them feel unsafe.

As for Boghossian’s tweets toward Percy, he questioned his boss’ priorities.

“Should this really be the president’s #highest# priority? Not fixing out of control budget deficits? Not producing knowledgeable students? Not advancing faculty research?” the philosopher tweeted.

MORE: Making jokes at Portland State gets you reported to its bias response team