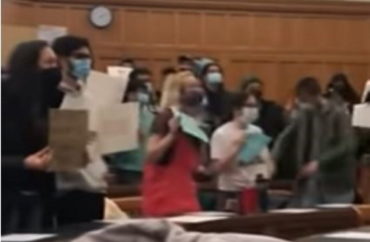 One protester told a member of the conservative group she would ‘literally fight you, bitch’

More details have come out regarding a recent incident at Yale Law School in which a bipartisan panel on civil liberties was disrupted by a rowdy group of protesters.

The students relied on a report from professional grifting organization Southern Poverty Law Center that called ADF a “hate group” because it supports religious liberty against homosexual activism.

As it turns out, it was members of the conservative legal group and the panelists who were apparently at risk of harm.

As they stood up, the protesters began to antagonize members of the Federalist Society, forcing [law Professor Kate] Stith to pause her remarks. One protester told a member of the conservative group she would “literally fight you, bitch,” according to audio and video obtained by the Washington Free Beacon.

With the fracas intensifying, Stith reminded the students of Yale’s free speech policies, which bar any protest that “interferes with speakers’ ability to be heard and of community members to listen.” When the protesters heckled her in response—several with their middle fingers raised—she told them to “grow up.” …

The comment elicited jeers from the protesters, who began shouting at the panelists and insisting that the disturbance was “free speech.” Eventually, Stith told them that if the noise continued, “I’m going to have to ask you to leave, or help you leave.”

The protesters proceeded to exit the event—one of them yelled “Fuck you, FedSoc” on his way out—but congregated in the hall just outside. Then they began to stomp, shout, clap, sing, and pound the walls, making it difficult to hear the panel. Chants of “protect trans kids” and “shame, shame” reverberated throughout the law school. The din was so loud that it disrupted nearby classes, exams, and faculty meetings, according to students and a professor who spoke on the condition of anonymity.

… At times, things seemed in danger of getting physical. The protesters were blocking the only exit from the event, and two members of the Federalist Society said they were grabbed and jostled as they attempted to leave.

The Washington Free Beacon reports that police were called to help keep the peace, that as the panel concluded, police officers arrived to escort Waggoner out of the building.

“It was disturbing to witness law students whipped into a mindless frenzy,” Waggoner told the Beacon. “I did not feel it was safe to get out of the room without security.”

Read the Beacon’s report here and The College Fix’s previous coverage of the incident here.