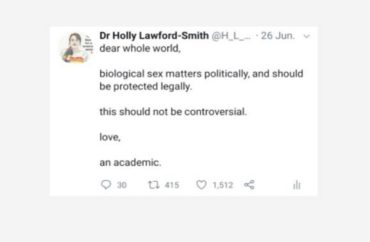 Over the past two months, an associate professor of philosophy at the University of Melbourne has endured immense criticism for creating a website that encourages women to share their stories of encountering men who identify as women in women-only spaces.

Despite critics’ efforts to have her fired and get her website taken down, Professor Holly Lawford-Smith has carried on with highlighting the conflict between women’s interests and the interests of men who identify as “women.”

Lawford-Smith became a major target for the cancel culture mob in late February when she published the website “No Conflict They Said.”

“In Australia and around the world, legislation is being introduced that replaces sex with gender identity. Advocates insist that there is no conflict of interests. But governments are not collecting data on the impacts of this legislative change,” its homepage states.

“If we can’t collect data, we can at least collect stories,” it adds. “Please tell us how your use of women-only spaces has been impacted. All stories will be published anonymously.”

A senior lecturer in cultural studies at University of Melbourne immediately denounced the site on Twitter, asking followers how they could “stop this nonsense.”

So a senior academic at my university has launched this website where you can "anonymously" send in stories of trans women harming cis women (she refers to trans women as men throughout). How can we stop this nonsense 😫 https://t.co/0y8AkrON1P

Another colleague, whose tweets and Twitter account has since been deleted, urged people to submit a flood of positive stories about transgenders, as well as report the site as an ethical violation.

When asked for comment on the controversy, Lawford-Smith directed The College Fix to a podcast interview she did on the matter.

In it, she stated that what had started as a “Twitter pile-on” soon “morphed into a drafting of an open letter” by some colleagues, students, and members from the local National Tertiary Education Union branch who then gathered signatures for about a week.”

“They drafted this open letter with a big kind of series of complaints about the website itself, and about my research ethics relating to the website — which I thought was rather desperate given that it’s not a research project at all — [and] many complaints about my teaching, which were just lies,” she said.

The letter is 111 pages with about 109 of those pages consisting solely of signatures.

In the letter, the signatories argue that Lawford-Smith’s site “contravenes the University’s Appropriate Workplace Behaviour Policy and raises serious questions about research integrity at the University” because it “spreads misinformation about trans people, encouraging vilification” and does not appear to have received the “ethics approval” required for research from the university.

‘As Dr. Lawford-Smith is a lesbian herself, we strongly oppose this vilification of her’

But the website “No Conflict They Said” clearly states its goal is to collect stories, not data.

While the homepage originally noted that Lawford-Smith was the site’s moderator, it did not mention the University of Melbourne nor Lawford-Smith’s connection to the university.

Now, her name is no longer on the site and the homepage states that the site is being run by LGB Alliance Australia, a group that published a petition in support of Lawford-Smith.

In it, the group states they are “concerned that academic freedom of expression and critical thought is under attack by those who wish to silence others with differing views, as in the case of the recent open letter calling for University of Melbourne to take punitive action against Dr. Holly Lawford-Smith, including calls for removal of her as a lecturer due to her creation of a non-university website.”

“These calls are stated in concern for ‘ensuring the safety and wellbeing of LGBTIQ+ students and staff via a supportive and welcoming intellectual environment,’” they wrote. “As Dr. Lawford-Smith is a lesbian herself, we strongly oppose this vilification of her as we feel it is hypocritical to call for the removal of a lesbian from her teaching position to protect ‘LGBTIQ+ students and staff,’ given Dr. Lawford-Smith is actually part of this community.”

While a university spokesperson had reportedly confirmed that the University of Melbourne is “committed to principles of academic freedom of expression, and to fostering a diverse, respectful, and inclusive community” and that its “academics are encouraged to engage in public debate,” it issued a new Gender Affirmation Policy on March 30.

The university did not respond to The College Fix’s request for comment.

According to a LGBTI news site, the University of Melbourne Student Union Queer Political Action Collective had organized a rally with the National Union of Students and some staff members to protest Lawford-Smith and her site on March 3.

Star Observer reported that about 150 to 200 students and staff members were at the rally and marched to the dean’s office holding trans-pride flags.

Katherine Deves, an attorney and co-founder of Save Women’s Sport Australasia, told the right-wing news outlet Sky News Australia that some of the protestors “intimidated” and “harassed” a small group of students who went to the protest to show their support for Professor Lawford-Smith.

Deves said that other, earlier protests had also been organized by students.

She also claimed that Lawford-Smith had “some of these activists break into her office space… [and] put trans flags and trans logos in her secure administrative place.”

‘I would happily trade this collection of antidotes for some real data, but if the choice is between nothing and this, then I will take this’

In her podcast interview with Spencer Case, Lawford-Smith stated that while the Australian government has passed laws to enable people who self-identify as another gender to change their legal sex, it’s “not collecting data or doing surveys to find out how many women are still using services after this change or what sorts of incidents have occurred.”

“In Australia, we changed sex. So, it’s not like the UK where they have a separate gender recognition system. We actually went directly to [where] you could change your legal sex on your birth certificate and then, the birth register by self-identification… And that, of course, just radically changed inclusion, so now anyone who identifies as a woman includes themselves in all sorts of spaces and services originally set up to advance women’s interests,” she said.

Although many people, she said, tend to just think of restrooms when they hear the word “women-only space,” it actually refers to a “really wide range of spaces,” many of which have been represented in the stories on the site.

“I think in the public imagination, people tend to hear ‘women-only space’ and they just think ‘toilets’ and it’s pretty annoying because lots of the media coverage has really been around like, ‘Ah, trans women just want to pee in peace and they’re in and out’ as if that exhausts the issue,” she said.

Lawford-Smith stated that she set up the website to point out that “there is a conflict of interest and there are these difficult trade-offs we have to make and, in this case, they’re between women’s interests and the interests of people with gender identities.”

“The whole politics of just giving trans-identified people whatever they ask for and want because they’re vulnerable as though that comes at no cost to anyone else … I think is just putting your head in the sand,” she said.

But her message is being suppressed.

Lawford-Smith states on her personal website that she can no longer be found on Medium or Twitter, as both have banned her.

“Confronting that question head on, like to what extent should we expect people who identify into women-only spaces to exhibit any of the … statistically more likely forms of male behavior or male socialization, [or] whatever you want to call it—you can’t even ask that question without being called a bigot,” Lawford-Smith said. “So, of course, the government’s not collecting the data.”

“… The website [then] is just a tiny effort to try to get some information. It’s testimonies, it’s anonymous, it’s hardly reliable social science but it’s a start was my thought.”

Critics argued that the stories published on the site, NoConflictTheySaid.org, are wholly unreliable due to the anonymity of their authors.

Lawford-Smith countered, however, that that’s just “the nature of allowing an anonymous platform” and that she even modeled the site after a similar, yet respected website called, “What It’s Like to Be a Woman in Philosophy.”

She noted that that site was created for women in philosophy when it was thought that the social costs were high for a single woman in philosophy to “blow the whistle on her experiences of sexual assault in grad school.”

“It’s sort of the same idea,” she said. “We have a situation that it’s really difficult to speak out against because the social costs are so high… You want some whistleblowing first with safety for the people blowing the whistle, and then you get some awareness and then maybe you can use that to start lobbying politicians or getting some funding for some real data analysis and gathering.”

Lawford-Smith said that some of the story submissions that have stood out to her recently were ones that didn’t involve outright violence such as rape or sexual assault but conveyed the psychological and emotional anguish women may experience when their spaces are invaded by biological men.

“Their stories kind of hit me hard because they’re about the way women feel unsafe and I think the way they feel is rational given their lifetime of experiences, but the activists will just say ‘She’s the bigot,’ right? ‘Cause she… see[s] a man but as soon as she’s told that that man identifies as a woman, she should shut up, right? Or she should put her feelings aside because ‘We should really care about him’,” she said.

“We’ve gotten to this really bizarre place where we’ve somehow conflated not respecting ‘my self-determination about absolutely anything at all,’ here, gender identity with somehow ‘denying my humanity’ or ‘my equal moral status,’” she said. “It’s just weird because it’s not the same thing. You can be equally human, and we can still talk about there being two different sex classes and which one you’re actually in and what relative status those two classes have.”