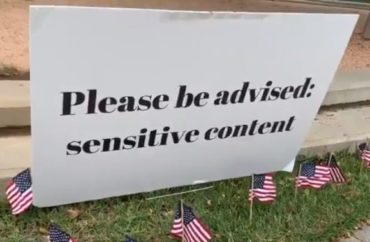 ‘The execution of this process was very poor’

Baylor University thought some people could be triggered by seeing a memorial for the Sept. 11 terrorist attacks that consisted of nothing but American flags planted in a strip of campus lawn.

The nominally Christian institution posted a trigger warning next to the memorial, which was put together by its campus chapter of Young Conservatives of Texas.

Following a critical tweet from the group, Baylor is now claiming that it only meant to show “reverence for the exhibit of flags.”

“Displaying the American Flag to memorialize those who tragically perished in the 9/11 attacks is now considered ‘Sensitive Content,’ Baylor YCT said Friday, the 19th anniversary. “Honoring those who died and first responders isn’t ‘Sensitive’, it’s ‘American’.”

The group said it specifically asked not to be given credit for the display, “in order to be apolitical,” but the Student Activities office put out both signs anyway.

Displaying the American Flag to memorialize those who tragically perished in the 9/11 attacks is now considered “Sensitive Content”. Honoring those who died and first responders isn’t “Sensitive”, it’s “American”. pic.twitter.com/0DHmY7h2sJ

The university “fully supports the 9/11 display of American flags depicting the thousands of lives lost as a result of the attacks that took place 19 years ago,” its tweet reads, calling the display “moving” and claiming it’s the only “official student event” on campus it has approved all semester:

Out of reverence for the exhibit of flags and in knowing that its moving symbolism could evoke a wide range of emotions, signage was placed near the display notifying those who passed by of its potential impact. This is a standard part of our process regarding outdoor displays which we implemented last year based on feedback from our campus community.

We regret that the signage we used has taken away from the intent of the display and apologize for any misunderstanding this may have caused.

A spokesperson went further in a statement to Campus Reform, saying Baylor’s “execution of this process was very poor.” What the university should have done is “produced a notice informing students, faculty, staff, and visitors of the upcoming 9/11 display and reminding them of its solemn and reverential meaning.”

The YCT chapter said in a press release that it had planted 2,977 flags on the Sept. 11 anniversary for several years to represent lives lost to the terrorist attacks. It has never put “signage or political messaging” on the display, but Student Activities told the chapter “[l]ess than 24 hours before” the event that it would place “expression activity” signs near the memorial.

The group said the university had subverted the purpose of the memorial, which was to “forget our political identities” for a day and jointly “celebrate the triumph of our nation over evil.”

Baylor placed no trigger warning on its own tweet memorializing the Sept. 11 terrorist attacks.

Today, we remember those whose lives were changed forever on September 11, 2001. #NeverForget

At 12:15, the McLane Carillon will offer a special performance in their honor, livestreamed on the Baylor Facebook page. pic.twitter.com/mvxF6PR3cD