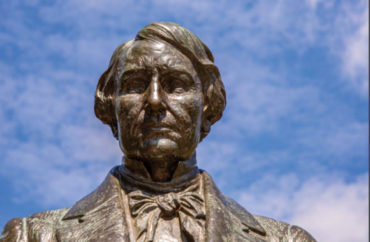 Baylor University will keep its name and a statue honoring namesake Judge R.E.B. Baylor, but will also erect statues of the school’s first African-American graduates, according to a report issued by the school this week.

The report, commissioned by the school in the wake of the death of black Minneapolis man George Floyd at the hands of Minneapolis police in the summer of 2020, also recommends moving some monuments and renaming a number of school buildings.

Over the past few months, students demonstrated to remove a campus statue of Judge Baylor, citing the fact that he was a slaveholder and supporter of the Confederacy. But the school ultimately recommended keeping the statue of Baylor on campus, focusing more on the Christian aspect of his life.

“Judge Baylor was not a perfect man,” said chair of the Baylor Board of Regents Mark Rountree in a statement following release of the report. “As a slaveholder, he engaged in a practice we know to be sinful and abhorrent. We do not justify or downplay the evil of slavery. With our University, Judge Baylor established the foundation for hundreds of thousands of students — which now include all races and creeds — to receive a unique educational experience that combines academic excellence and a Christian commitment.”

The report’s authors did take issue with the plaque on the Baylor statue stating he “exemplified in his life the motto of Baylor University Pro Ecclesia/Pro Texana,” suggesting that such a statement means slavery is an acceptable part of life at the school.

“There is no evidence in God’s word supporting injustice and inhumane treatment of Black persons; therefore, to preserve the honor and credibility of Baylor University’s commitment to the Christian faith, this statement must be removed or further explained,” the report reads.

The report was written by the Commission on Historic Campus Representations, a group of 26 individuals representing Baylor alumni, Regents, faculty, students and staff that was established as part of a unanimously-passed “resolution on racial healing and justice” by the Baylor Board of Regents in June 2020.

“We believe that by forthrightly and fully addressing Baylor’s history, our continued journey of redemption and reconciliation will lead to a season of renewal and new beginnings on our campus as we take measures to address all historical aspects of the Baylor story and celebrate the value of all members of the Baylor Family in fulfillment of our Christian mission and in keeping with our Christian witness,” said school President Linda Livingstone in a statement following release of the report.

Among the report’s other recommendations were:

-A plan to rename a park to a “suitable name to create a space that is welcoming for all students at Baylor;”

-Relocate the Rufus C. Burleson monument to a “less prominent location and “re-contextualize” the monument to acknowledge his support of slavery and his “standing as a prominent promoter of the ‘Lost Cause,’ the concept of a divinely white Southern future that honored the memory of antebellum whiteness and Confederate heroes;”

-“Investigate the possibility of renaming Carroll Library due to its namesake’s ties to enslavement and his participation in the Civil War on the side of the Confederacy;”

-Move statues of founders William Milton Tryon and James Huckins together to make room for a monument to the “unknown enslaved” people owned by these men. Further, change the text on the statues to recognize the men were slaveholders.

But the main point of contention for months has been the presence of Judge Baylor himself.

“As a slave owner and as a Confederacy supporter, he should not be on this campus, especially right in front of Waco Hall,” campus activist Sam Onilenla told a student paper back in February. “There’s nothing religious about killing slaves or having those ideas.”

But this week, Onilenla was more circumspect, declining to criticize the report that left the statue on campus and saying he was “overall impressed” with the committee’s work.

“At the end of the day, they’re all recommendations,” he told the Texas Tribune. “It’s about implementing those recommendations that we’re going to have to see.”