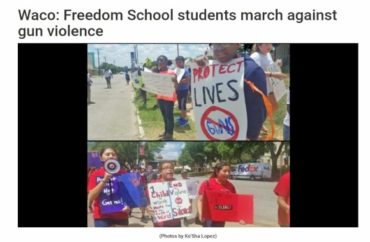 ANALYSIS: Why does one of the largest Christian universities in the nation support left-wing programming?

Baylor University’s Children’s Defense Fund Freedom School summer literacy program is apparently being used to promote a leftist agenda among local children, some of whom are as young as 11-years-old.

According to the university’s website, the program “is a partnership between Baylor School of Education, Waco ISD and Transformation Waco, Prosper Waco, and the City of Waco,” which promotes “social action” and “character building.” Further, the students “are exposed to culturally relevant books and meet with community guests to learn how to be agents of change in their local areas.”

But what exactly is the social action the university is promoting? It appears it’s the same leftist agenda promoted by the Children’s Defense Fund.

On their website, they call for restrictive gun control measures and use children as political props in their anti-gun crusade. This is supported by an article on Baylor’s own website, which states that students “were presented topics surrounding issues that affect children…. [including] education, health care, and gun violence.” Just last week, Freedom School students participated in a university-sponsored National Day of Social Action protest against gun rights.

Chris Walker, president of the McLennan County Young Republicans, expressed concern at the political nature of the program, telling The College Fix that it is “very concerning to see so many local organizations, including Baylor University, funding and supporting what appears to be a left-wing indoctrination camp disguised as a literacy program.”

According to one report, the Freedom School also uses “Teaching Tolerance” materials from the Southern Poverty Law Center, a leftist organization known for extreme overreaches such as adding Ben Carson to its “extremist watch list” and inciting a deadly attack against the Family Research Council, a Christian advocacy organization. What reports? We should cite or hyperlink back.

According to the Family Research Council, “Teachers are instructed to cite gay and lesbian couples, single parent, and partner/guardian relationships as examples of families ‘no different than’ traditional nuclear families,” and are encouraged to have a “‘gender-neutral day in the classroom’ as a starting point for discussion about societal expectations for gender norms.”

This appears to go against the university’s Statement of Faith, which says: “We believe, on the basis of biblical teaching and together with the vast majority of Christians throughout the ages, that sex is intended by God solely for marriage between one man and one woman.”

Additionally, students were shown an HBO documentary “Valentine Road: The Murder of Lawrence King,” which chronicles the gruesome murder of a gay male teen who “[wore] makeup and heeled boots to school” at the hands of a straight classmate he had asked to be his valentine.

The executive director of Baylor’s Freedom Schools is Dr. Lakia Scott, assistant professor in the Department of Curriculum & Instruction. According to her bio, “social justice curricula” is among her primary research interests.

When asked about this, Grant Hillman, vice chairman of Baylor Young Conservatives of Texas, told The College Fix: “It is surprising that a university that self-identifies as [Christian] would be directly participating in teaching young children values that are so clearly contradictory of those in the Bible. Furthermore, the reading materials in this program are undeniably political. …My left-leaning public school in California wasn’t even this bad.”

Asked about the programming, Baylor University spokeswoman Lori Fogleman had the following to say regarding the controversy:

The incident referred to is an aberration, and new processes are now in place that ensure that the learning opportunities students receive in the Freedom Schools program are appropriate for their age. The students range in age from 11-13, and no films will be shown rated PG-13 or higher from this point forward.

Baylor has taken action to include personnel changes as part of the program.

Additional measures include written descriptions of the curriculum to be sent home each week to each family, in addition to the mandatory weekly parent meeting. Parents may opt their child out of any piece of the curriculum, and the program will continue to reinforce this option with parents. In the future, the Freedom Schools will provide a complete syllabus of programming for the parents at the mandatory parent orientation before the camp begins.

The University takes great care in providing educational and enriching programming for these students, and our utmost priority is ensuring a safe and healthy educational environment for all.