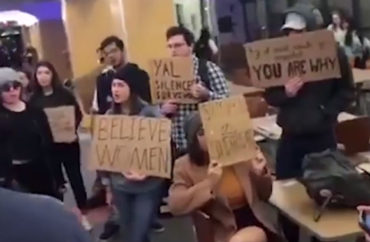 University not aware of any policy violations by protesters

WASHINGTON – Tuesday night’s event on due process and #MeToo at American University featured a rare occurrence: a featured speaker who was more pleased with administrators than her student hosts.

In a phone interview with The College Fix, Amber Athey praised the private university for providing security for her and defending her right to speak amid threats of violence against her.

“I was happy to give my speech with minimal interruptions but I wish that the protesters would have been more interested in seeking dialogue than engaging in political theater,” the Daily Caller editor said.

Athey and her hosts, the Young Americans for Liberty chapter, had a falling out over the original title of her speech, “No, Don’t Believe All Women.”

The chapter changed the title without her permission, Athey wrote in a first-person account of the event. The title was “intended to provoke thought” by defending the importance of “making sure that innocent lives aren’t ruined by false allegations.”

Athey pointed to threats of violence allegedly made by a student club that was planning to protest her. The university administration declined to comment on the Facebook screenshots provided by Athey, which appear to be from a closed group.

The YAL event quickly provoked tensions owing to the title. The student government’s Women’s Initiative offered a “safe space” during the event and accused the libertarian club of promoting “the disempowerment and invalidation of survivors” who share their allegations.

Though YAL later changed the title to “Your Due Process: # MeToo,” it said it wasn’t changing the content.

Athey’s speech focused on then-Supreme Court nominee Brett Kavanaugh’s confirmation hearings and the role of due process, as well as “how believing all women actually hurts women the most.”

She referred to the safe space that had been set up in response to her topic, telling the audience at the start: “If you are truly traumatized by my speech, you should be responsible enough to stay home.”

Athey also addressed the title change, saying she respected YAL’s decision but wanted the audience to know the original title.

She said the “#BelieveAllWomen lie” was most widespread on college campuses, “which have perhaps the worst track record when it comes to properly adjudicating sexual assault claims.”

She highlighted examples of women whose allegations were widely believed and later revealed to be false, such as Crystal Mangum’s against three Duke University lacrosse players in 2006. They were exonerated owing to DNA that did not match her accusations.

MORE: Student government sets up ‘safe space’ from due process

My speech at AU tonight is NOT about "invalidating" sexual assault victims — it is about protecting the rights of accusers and the accused.

Check out my clip from @FoxNews this morning: pic.twitter.com/3dN0ffHGto

Athey drew parallels between how Kavanaugh’s confirmation played out and the “campus kangaroo courts” in Title IX sexual misconduct proceedings.

Kavanaugh’s primary accuser, the professor Christine Blasey Ford, gave “compelling and emotional” testimony that was nonetheless filled with “numerous contradictions, such as how many people were at the party where she claimed to be assaulted,” Athey said.

“News outlets like CNN, NBC, and the NYT ran with the allegations – even the gang rape allegation – as gospel,” she continued: “Because how could they conceivably question any of the women without setting off a firestorm like the ruckus some of you made about this speech?”

That referred to the crowd of protesters outside the venue (below), which video shows carrying cardboard signs and chanting “We Believe Women.” Athey estimated there were around 20 to 30 protesters.

“Leftists might not be inclined to feel sympathy for the relatively financially well-off white males that I’ve talked about,” Athey said, but they should care about how due process protects the poor and minorities. History has shown that “false rape accusations were once used to lynch innocent black men.”

The #BelieveAllWomen movement is “an assault on anyone accused of a crime,” she concluded, because “it strips people of their right to due process and claims that a story alone is proof that something happened.”

And when schools are expected to handle what amount to criminal claims, the results were “predictable – innocent people got railroad.” 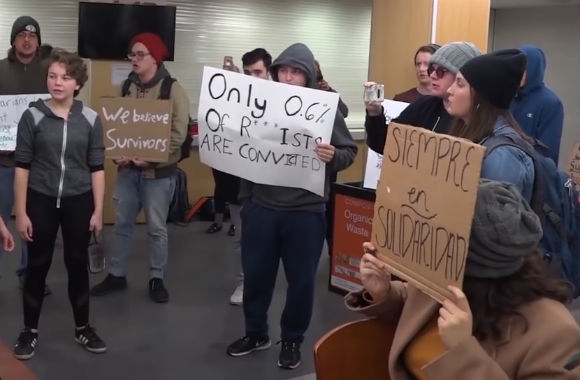 According to Athey’s account in the Daily Caller, she was told the day of the event that police would escort her through a back door in response to planned protests, and security would be stationed outside the room.

She thought it was “just a precaution in case the planned protests got rowdy or out of control,” but shortly before the speech, “police discovered credible threats made to myself and the hosts of the event.”

Athey posted screenshots from Facebook groups that she attributed to members of the “Democratic Socialists club at AU.” One included a link to a Google Drive folder, posted two days before Athey’s event was announced, that the poster said included “links, descriptions and photos for self defense / Nazi punching.”

The folder appears to have been removed from its web address as of Thursday evening, but Athey said it included instructions on “how to use hand strikes and kicks” for “situations where knocking someone’s lights out is the best answer.”

Athey told The Fix in a Twitter message that she was told the Google Drive screenshots came from the closed Facebook group for the Young Democratic Socialists of America chapter at AU. The YDSA chapter did not respond to a request for comment from The Fix.

Another she posted shows “Lefty Memes for AU Teens” as the Facebook group, but a search for the term does not turn up any Facebook pages.

Athey’s speech went on as planned, with few students who “civilly disagreed with me” arriving in time to get seats, she wrote in her account. A large group came in halfway through, which Athey interpreted as an attempt to disrupt her, but had nowhere to sit.

The crowd outside started chanting “We Believe Survivors” when she noted the lynching of black teenager Emmett Till in response to a false allegation of sexual assault, Athey said. But the chants ended after about a minute and protesters left because they “eventually got bored or tired or both.”

Mark Story, director of strategic communications for the university, told The Fix he wasn’t aware of “any conduct codes or university rules that were broken” by the protesters at the event.

“Persons seeking to express dissent are permitted to do so in a manner that does not infringe on the speaker’s right to express themselves and the audience’s right to listen to the speaker,” he wrote in an email.

American University “defends the right to free expression” regardless of whether “everyone will always agree” with a given viewpoint, he continued. The university “provided adequate staff presence to ensure that all parties had the opportunity to express their views” since it was a student-sponsored event.

Promotion of event did not produce ‘healthy and respectful civil discourse’

While YAL’s original statement responding to the controversy did not blame Athey, it turned on her in a statement given to The Fix via Facebook.

“When you have a speaker who is using tactics of provocation on social media platforms, national news, and inflammatory marketing to promote the speech, despite the importance of the message, protesting is what you are going to get,” the club said, apparently referring to Athey’s promotion for the event both online and in media interviews.

“Overall, the event was fine,” the group said, but it “regret[s] the marketing” of it. “We want to promote healthy and respectful civil discourse and this is not the proper way to go about it.” Going forward, “we do not wish to associate with the speaker any longer due to her tactics,” the chapter wrote.

Apparently responding to protesters who complained that the room was full when they came in, YAL said the space was limited to 50 attendees “due to fire concerns.”

Asked which club member to identify as the author of the statement, YAL told The Fix not to use the statement it had provided. “We no longer wish to give any attention to this issue nor this speaker due to what was said above.” Athey did not respond to a request for her reaction to YAL’s statement.