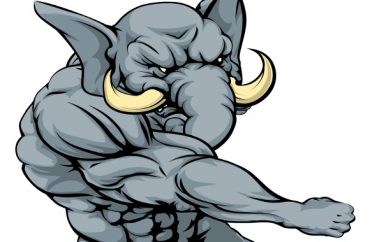 If any campus group has a right to feel demoralized, it’s the Berkeley College Republicans.

Consider that since the start of the 2016-17 school year, the group’s members have been doxxed — twice — get yelled at on nearly a daily basis, had their property repeatedly ripped up and destroyed, and even had rioters throw rocks into a building that sheltered them.

Yet the roster of Berkeley Republicans has stayed consistent, and members continue to table for their cause on a quad that is immensely hostile to their message.

“At the first meeting [at the start of the school year] we had maybe around 30 attendees,” said Pieter Sittler, vice president of the Berkeley College Republicans, in an email to The College Fix. “Usually the first meeting of a club is the high point, but we have been able to maintain that number pretty consistently. I think they are attracted to our cause — they see us out on Sproul Plaza all the time and want to join the fight.”

Tabling at Sproul Plaza is like being embedded inside enemy lines.

“At least once per day, somebody walks up to the table and makes a distasteful comment, so we face harassment frequently in that sense,” Sittler said. “Every so often, it is more serious (i.e. sign destroyed, Trump cutout torn to pieces, a member gets punched, etc.)” The group managed to tape back up their life-size Donald Trump cardboard cut out and go on with their day. Ironically, the incident happened on the same day CNN published a special report on how Berkeley College Republicans are constantly attacked and criticized on a campus famed for being the birthplace of the free speech movement.

The very next day, the group was hit again. The Berkeley College Republicans’ life-size cardboard cutout of Donald Trump was ripped up by five bandits in the middle of the quad.

Then, in early January, five members had personal information about themselves published by a leftist group, what’s known as being doxxed. Among the published materials were URLs to their social media pages, images culled from their personal Facebook pages, videos and summaries of their campus activism efforts, descriptions of their right-leaning and pro-Trump social media posts, and in one case the address where one student works and in another a partial image of their drivers license grabbed from a Facebook picture.

What happened next made national headlines. In early February, the Berkeley Republicans attempted to host Milo Yiannopoulos, and all hell broke loose. Rioters threw rocks at and set things on fire near the building where Berkeley Republicans sheltered in place. At least one member was pushed and shoved.

“We know who you are, you can’t hide from us,” Berkeley College Republican Naweed Tahmas described regarding what he faced that night. “It was so violent at that point. They were surrounding me. They were assaulting me.” Later, someone threatened to jump Tahmas when he least expected it.

Ultimately, Milo’s speech was shut down due to the violent protesters.

Since then, an anonymous leftist group published the names and information of hundreds of prospective Berkeley Republicans members who had signed up at the Milo event, marking the second dox.

Some people who signed up to learn more information about Berkeley College Republicans got this email after a contact sheet was stolen: pic.twitter.com/AEZr5nP2YC

“[S]omebody swiped the sign-in sheet from our table and then posted something on a crazy left-wing forum that day saying they would release ‘career-damaging’ information on the people on the list within 48 hours or so,” Sittler said. “The names of the kids were released, but of course nothing incriminating was found on them because they are innocent students who stand behind BCR.”

While most observers were shocked at the violence that shut down the Milo event, the Berkeley Republicans were again disparaged by peers, as the campus newspaper published five opinion pieces defending the violent protests.

And the hits keep coming. In late February, a student destroyed one of their signs in broad daylight.

Around the same time, fliers were distributed around campus that slandered specific members of the group (pictured). Despite everything they have endured, the group won’t quit.

Today they’re hosting a talk on feminism. One of its members, Rudra Reddy, has also taken to the pages of The Californian campus newspaper, penning op-eds that tackle the notoriously left-leaning institution’s sacred cows.

There is also plans to bring more prominent speakers to campus, Sittler said.

Meanwhile, campus leadership has finally taken a stronger stance — at least verbally — in condemning the attacks on the student group.

“Let there be no mistake: The campus administration condemns all acts of vandalism and attempted intimidation. These matters are now under investigation by UCPD, with the aim of identifying the perpetrators and imposing appropriate consequences. We encourage anyone who has relevant information to bring it to UCPD,” Nils Gilman, associate chancellor, stated in a campuswide email.