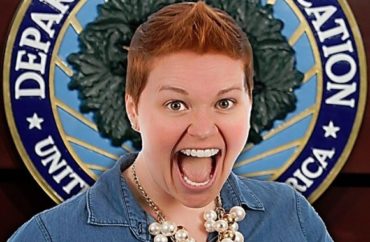 One of the most common refrains heard from Democrats this past election was that democracy “is on the ballot” as Republicans literally are a threat to the American way of life.

But according to one Biden administration senior Department of Education official, the democracy we so value is actually a product of … white supremacy.

Fox News reports that on her now-protected Twitter account, DOE Office of Educational Technology Deputy Director Kristina Ishmael (pictured) wrote that “[Democracy is] also built on white supremacy, which I see perpetuated in education circles when BIPOC folx are being told they’re too negative by addressing real issues instead of superlatives.”

(Translation break: “BIPOC” = “black, Indigenous, people of color” and “folx” is a gender-neutral version of “folks.”)

Ishmael’s tweets also ripped American Evangelicals (“welcomed ‘hate’ and ‘white supremacy’ into its institution”), noted how she left a discussion because a white guy had “dominated” it, and how she was “tuning out” white people in general.

Ishmael also tweeted that the term “stakeholder” is “colonizer language to ID the white men who staked their claim to land” and that the “ideal” concept of (body) weight and shape is a “White supremacist ideal.”

MORE: Professor: ‘White supremacy is embedded in everything’

In another tweet, Ishmael seemingly cast doubt on whether White gay men deserved to be considered a marginalized category in curriculum.

“In most ‘inclusive’ materials,’ the most dominant folx are still represented in the marginalized group (e.g. white, cis, gay men). This does not include the nuance of this group,” she said.

In other instances, Ishmael blasted the “white perspective” in curriculum.

“[M]ost of my curriculum was written from a very narrow and white perspective,” she said.

“As a teacher, how many times have you been asked to uphold white supremacy through dominant-culture norms,” Ishmael said. …

[She] has also said that “white supremacy” is baked into classroom rules.

She said, “So if I’m on a webinar with professionals speaking… should I also share Zoom rules with them to remind them of no gum chewing, muting mics, etc.? Oh, that’s right, NO! And we shouldn’t with CHILDREN either… Can’t help but see the white supremacy built into the ‘rules’ I’ve seen floating around.”

Some of Ishmael’s tweets shortly before her account was made private indicated she is not happy with Elon Musk’s Twitter purchase (“Starting the morning with an archive of my account. It’s all too real and too sad right now”) and that she’s been battling depression.

According to her Linkedin profile, Ishmael is an “educator, learner, advocate, and agent of change” who once worked for the Nebraska Department of Education “where she led professional learning and advocated for school librarians.”