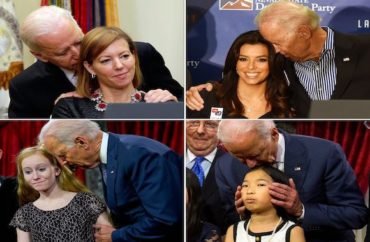 Former Secretary of Education Betsy DeVos said President Biden sexually harassed her at their first-and-only meeting — by putting his hands on her shoulders and pressing his forehead against hers.

According to MLive, in 2019 DeVos met the future president “backstage at a speaking engagement” while she was in a wheelchair recovering from pelvic surgery.

She recently told the Megyn Kelly podcast that Biden “put his hands on [her] shoulders and his forehead on [her] forehead for several seconds” which left her “nowhere to go to or escape.”

DeVos said “If he had done that as a student on a college campus, under his proposed rule[s], I would have a Title IX sexual harassment allegation to levy against him because of his conduct. I’ve heard from many students who had lesser encounters, or lesser situations than what I had to encounter with him, and yet he wants this for college students but will not acknowledge or agree to probes into allegations of much more egregious conduct on his part against other women.”

Despite the article noting it wasn’t “immediately made clear” if Biden’s actions would have been a violation of his own Title IX rules, the U.S. Department of Education website states

As noted in-depth by The College Fix, Biden wants to go back to how Barack Obama-era interpreted and utilized Title IX … and more. If the president has his way, Title IX will be expanded to cover gender identity, which critics say will mean biological males must be allowed to use girls’ locker rooms and restrooms.

Perhaps most concerning is the potential rollback of basic due process protections for those accused of (sexual) misconduct. These include ditching live hearings, the right to cross-examination and weakened opportunities for legal representation.

The administration noted it justifies all this based on meetings and “listening sessions” in which “many” said “some of the [Trump-era] procedural requirements issued in 2020 made compliance more difficult for them” and that “live hearing and cross-examination requirements were having a chilling effect on students who might otherwise report sex-based harassment” (pages 27-28).

Make note too that DeVos’s situation actually was rather tame compared to some of the other, er, uncomfortable antics in which Mr. Biden has been involved. But as we’ve seen, no other administration had made it clearer to whom the rules and laws apply … and it’s not him.

MORE: Biden’s nominee is a ‘wolf at the door’ when it comes to due process rights for accused students