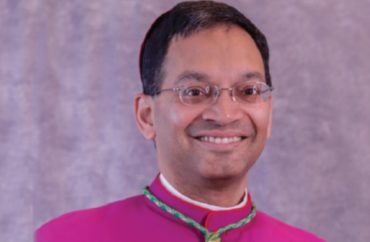 The new bishop of the Diocese of Columbus wants to see more priests come out of the 60,000 student Ohio State University – so he has sent in a new chaplain to boost vocations.

Bishop Earl Fernandes is just a few months into his new role, but he wants to fix a problem the diocese has – it did not ordain any new priests this year.

He appointed Adam Streitenberger, a diocesan priest, to oversee the St. Thomas More Newman Center at OSU with an explicit goal to obtain more seminarians and eventually, priests.

“This is the first step in an exciting and renewed vision for vocations and evangelization within the Diocese of Columbus, in which the St. Thomas More Newman Center will play a vital role,” the bishop (pictured) stated in a news release.

“With over 60,000 students attending The Ohio State University, the Diocese is presented with an incredible opportunity for both the proclamation of the Gospel of Jesus Christ and the potential for future priests and religious,” the diocese stated in its announcement. “Religious” refers to people who might become nuns or brothers in different religious orders, such as the Dominicans or the Franciscans.

The diocese declined to comment beyond its news release when asked for further information on its plans to increase vocations. “Specific details regarding programs will be released at a later date,” communications director Jason Mays told The College Fix. Attempts to reach Streitenberger, the new chaplain, were not successful.

A young Catholic in the area who previously attended the Newman Center Masses said he is optimistic about the changes.

Will Matthews, a 23-year-old who now attends the Latin Mass at St. Leo’s Oratory in Columbus, told The Fix that “God-willing” the Newman Center would place more of a focus in teaching the faith to their students.

“So often I have noticed that students who receive formation from the Newman Center might love their faith, but they don’t know their faith,” Matthews said via text message.

“As a case study, one of my friends who became Catholic this year was urged by his friends at the Newman Center to go through RCIA elsewhere even though he is an OSU student,” Matthews said.

He said that if the Newman Center wants to see a renewed number of vocations, it should rely on traditional liturgical practices, such as incense and the priest saying the Mass facing the altar, not the congregation.

“If the Newman Center wants to fulfill its stated goals of student focused ministry and promoting vocations to the priesthood, it should certainly offer the Latin Mass,” he said. “It is liturgy that creates saints, nourished our fathers in faith, and per multiple surveys, plants seeds of devout faith.”

In terms of growing interest in vocations he went on to say “in most dioceses in the USA, older priests are not being replaced by new ordinandi. Among religious societies who celebrate traditional rites regularly, vocations are numerous and older priests are being more than just replaced.”

“Fr. Streitenberger is a priest that I do not know exceedingly well, but I know that he believes the Faith and the Masses said at his parish, all of which are Novus Ordo,” referring to the Mass primarily used since 1969. The Novus Ordo Mass is commonly said with the priest facing the people and is often said in the vernacular with minimal Latin.

He said the new Newman Center priest “says the black and does the red,” which is a major improvement over the liturgies offered by the Paulist Fathers.

The phrase refers to following the directions for the Mass instead of deviating and introducing novelties.

“I have a lot more reason to believe that he will effectively teach the faith to OSU students than the Paulists,” he said, in reference to the Paulist Fathers who have been the chaplains at OSU for 66 years.

The Paulist Fathers did not respond to requests for comment on what kind of faith formation they offered to those deciding to become Catholic and to students in general at Ohio State University. The religious order declined the bishop’s offer to stay and assist the new director, according to the National Catholic Register.