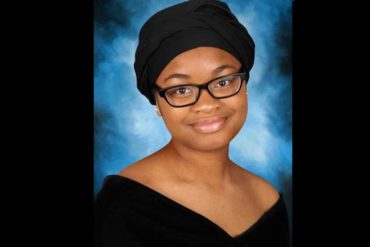 A black female in a “head scarf” is the primary suspect in a vandalism against the University of Virginia Black Cultural Center, according to a police report obtained by The College Fix through a public records request on November 30.

The police report identified Zaynab Bintabdul-Hadijakien as the person most likely to have thrown a rock through a window at the Luther Porter Jackson Black Cultural Center within the campus Office of African-American Affairs in August.

She (pictured) likely carried out the attack as retaliation against the interim director of the center, Michael Mason, who also oversees psychological services, according to the report and Mason’s comments.

UVA’s media team did not respond to requests for comment on Bintabdul-Hadijakien’s current status at the university and her court case.

A search of the Albemarle County court system did not yield any further information on charges against her. The College Fix called the county prosecutor’s office on Thursday morning and left a message for communications director Emily Kilroy.

Alison Wood, the public records coordinator for the county police department, responded to an email sent to Kilroy and other staff for the prosecutor’s office. Wood’s said that the county’s “involvements regarding [Bintabdul-Hadijakien]” were for “two arrests for Failure to Appear charges on 10/3/2022 and 10/28/2022.”

No contact information for the suspect could be found.

Police arrested and charged Bintabdul-Hadijakien on September 3, but the university never named her nor provided any other information beyond saying the suspect was a student.

“We are unable to divulge the student’s identity due to federal privacy laws, but the individual in question has been charged with this act of vandalism,” a September 22 email from university officials stated.

Bintabdul-Hadijakien was her high school class valedictorian in 2020, according to a tweet from McEachern High School, a public school in Georgia.

MORE: Professor arrested for beating wife as she put on hijab

When served with a warrant, the suspect said she was “innocent” and was being targeted by the university police, but also asked the cop to shoot her, according to the report.

Another part of the police document reports that an officer responded to a woman in “crisis” at the student health center. She expressed “anger, frustration and concern” about Mason, the report stated, leading law enforcement to see her as a suspect.

Mason told police during an initial interview that there were several individuals he thought might have been targeting him, including a former staff member and a student. He said that he possibly was the target due to his work with the counseling center.

Police reviewed video footage that allegedly appears to show the suspect throwing a rock through a window, according to the report. 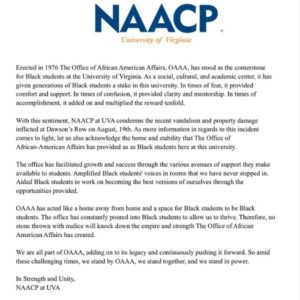 The NAACP at UVA, which condemned (statement above) the rock throwing, did not respond to a request for comment via Instagram on Thursday that asked if it planned to release another statement with the knowledge now that the suspect is a black individual.