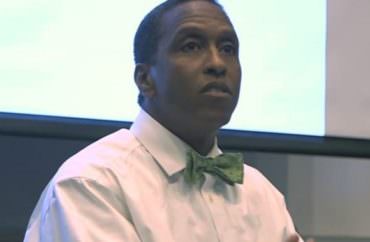 A black professor teaching at a private Christian university has been suspended for making a highly controversial statement about some members of the Black Lives Matter activist group.

Professor Toby Jennings of Grand Canyon University was sanctioned after a video circulated of comments he made at a forum nearly a year ago in which he said that some members in the Black Lives Matter group “should be hung.”

Jennings has been placed on administrative leave until the end of the semester and the school has launched an investigation into the matter as local NAACP and Black Lives Matter leaders call for more repercussions, saying it isn’t enough for the scholar to be “privately contrite,” AZ Central reports.

“They called for GCU to fire Jennings’ and to make a ‘substantive change’ to its campus culture,” it reports, adding that Black Lives Matter-Phoenix vice chair JJ Johnson said “it is unconscionable that the man that made the inflammatory comments is still employed.”

In a statement posted on its website, Grand Canyon University officials explain that the September 2016 panel, “God’s Concern for the Poor: What’s Missing in Social Justice?” included a 75-minute discussion on sensitive issues as the school attempted to tackle the nation’s racial unrest from a Biblical perspective with a panel of four professors, two of whom white and two of whom black.

The university transcribed Jennings’ remarks in context, which stated:

The Black Lives Matter movement, we can’t even talk about it as the Black Lives Matter movement because it is not a monolith, that is, it does not look the same all across the board. You have folks who claim to participate in that on one side that are very thoughtful about the matter. They are very gracious and discerning and conversationally, dynamically dialoguing about the issue. They’re wanting to hear what somebody else has to say about it. And then you have people on the opposite extreme of that that frankly should be hung. And, yes, I did say that on video. They are saying things that are not helpful to any way, shape or form of human dignity or flourishing. That is not helpful to any conversation. That kind of rhetoric is not helpful to any conversation. And that’s what I mean by they should be hung. That’s not to say that I’m joining the rhetoric. But I’m saying that is not contributing to the conversation is what I mean by that. And then you have everybody in between. And so, when we talk about the Black Lives Matter movement, you have some who would support it, but what is it that you are supporting? I support facets of it. …”

The university added: “The reprehensible rhetoric in this statement is unacceptable and the University condemns it in the strongest terms.”

Dr. Jennings, for his part, has also issued a public apology:

In light of the reality that I, Toby Jennings, am a sinner who has received the forgiving and rescuing grace of Jesus Christ, I confess that I both sin and have sinned. Particularly, I have inexcusably offended many fellow image bearers of God by my imprudent use of inappropriate, uncharitable, and incendiary language. Not only does my communicated sentiment not reflect my personal and more thoughtful disposition toward any and all priceless treasures who bear the image of my heavenly Father, but my impassioned choice of words certainly does not reflect the pathos, practice, and vision of Grand Canyon University.

Having been entrusted with representing such an institution that has a public record of contributing Godward change in individuals and in our community, I deeply and sincerely regret having communicated such ill-motivated rhetoric—particularly in light of our nation’s present rhetoric-saturated distress. While words, once spoken, can never be taken back, my hope is that my sincere apology for my own words can pave a more gracious path toward reconciliation—a reconciliation that is at the core of the gospel of Jesus Christ—humanity’s sole hope for rescue from all its evils.