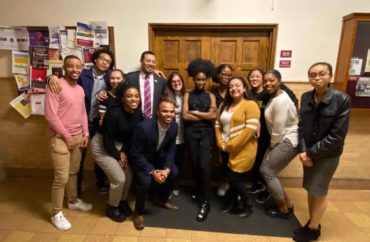 Fordham University agreed to several demands from the Black Student Alliance in late June, but now the student group is back for more.

It’s a demand first made in its June 22 list and now reiterated after the school did not agree to it three months ago.

The 16-point list, titled “Demands Volume II,” asks the university to “[h]ire more black professor” but “more specifically queer black professors,” according to the post on the group’s Instagram page.

The Black Student Alliance makes a total of 16 demands, including cutting ties with food provider Aramark, which it accuses of having a “history of prison abuse and racism.” The student activists also want mandated “anti-racist bias training” for all resident assistants.

Support us in this effort by emailing the Board of Trustees via our link in the bio . ASILI Demands Vol. II is comprised of previous demands that Fordham has not clearly addressed and new demands brought up by members of the student body. Thank you to everyone who continues to support us ❤️

It comes after an initial 11 demands were made by the Black Student Alliance. The university agreed to three of them.

The whole list is “comprised of previous demands that Fordham has not clearly addressed and new demands brought up by members of the student body,” according to the August 31 post by the student activists.

The first set came out June 22 and the university agreed to several of the demands after just one week, following a campaign by the group to encourage its followers to email administrators.

“We saw some victories in Fordham University’s action plan, but there is still more work to be done. Change is possible, let’s keep it going,” the group wrote in a June 29 Instagram post.

The university and the Black Student Alliance have come to an agreement on creating a safe space for students of color, creating an employee bias training program and making a commitment to combating anti-blackness at Fordham.

The Black Student Alliance did not respond to multiple emailed requests for comment nor an Instagram message in the past week from The College Fix.

Many of the other demands from the first list, such as the call for black representation and the demand to cut ties with police, are still present in the second due to them not being met.

The university did not agree to “appoint more black and queer people into administrative positions.” It also did not “make a commitment to combat anti-blackness at Fordham university through course requirements,” but there has been some progress.

While this demand is not elaborated on in this June 22 post, another post by the page on July 28 said that the student government and the Black Student Alliance are pushing for a mandatory core curriculum course on antiracism. The two groups said the university is exploring this idea in the July joint statement.

Go to the @fordhamusg page for more information. Demand 8 in-progress

The students since added a demand that the school “recognize advocates for a Palestinian perspective” as a student organization and asks university officials for an apology for “racist terrorization of Students for Justice at Palestine.”

The university has refused to recognize the group, which often clashes with Israeli student groups, but a judge rejected the school’s position last year.

The activists also added a requirement that resident assistants participate in a “mandatory seminar about Bronx and Bronx history.”

Another demand from the second volume asks the school not to punish students who are arrested for off-campus protests.

Fordham University did not respond to multiple emailed requests for comment from The Fix on the new list of demands in the past week.