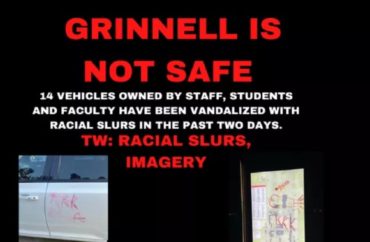 Students told the university but did not contact Grinnell police

Black students at Grinnell College alleged that 14 cars were vandalized with racist messages but two months after the alleged incidents, the city police has yet to receive a formal report.

Campus safety officials have also remained mum on any update into the investigation.

The College Fix contacted campus safety officials James Shropshire and Denise Bennett to ask about the graffiti and any reports they received. Neither responded to two emails sent in the past two weeks.

The Grinnell Police Department was only “made aware of that situation once we were investigating another incident,” according to an email to The College Fix on December 5 from Wanda Simmons, an evidence and police administrative technician for the law enforcement agency.

“The Campus Security took a report on that incident,” Simmons said.

A news release shared by Simmons in response to a public records request from The Fix stated that the city wanted individuals who know about potential vandalisms to report it to the police.

There is one photo of a car with illegible writing on it included on the GoFundMe. A cover image states that “14 vehicles owned by staff, students and faculty have been vandalized with racial slurs in the past two days.”

However, the description text states that “17 cars and two directory signs were vandalized with racial slurs and imagery” on October 9.

The Fix emailed the Black Student Union on December 12 and asked for clarification on the number of cars vandalized, proof of the vandalism, the names of alleged victims and for confirmation that no police report has been filed with the city. No response has been received.

“Through inaction, Grinnell College and the city of Grinnell have fostered a community of racism and bigotry unsafe for students of color,” the ongoing fundraiser states. “Since the beginning of the semester, Black students have been targeted at unprecedented rates; the attacks included racial slurs, aggressive language and threats of assault.”

“Proceeds will be put towards providing food, transportation and general welfare for Black students suffering from trauma,” according to the GoFundMe page.

The Des Moines Register reported, based on allegations from black students that, “at least 14 cars parked on a campus lot on 10th Street and signs nearby were covered with racist and white supremacist graffiti.”

“I wanted to do all of the stuff you see in the movies instead of fighting racism,” Loyal Terry, co-spokesperson of the Grinnell BSU, told the Register.

“I’ve been harassed by multiple white women yelling at me from their cars,” he continued. He told news station KCCI in October there had been “over twelve confirmed incidents of students being called (racist slur), et cetera.”

The College Fix contacted Terry and fellow Black Student Union member Bethany Willig twice in the past three weeks via email and Instagram to ask about the incidents and for any proof of the vandalism, but neither has responded.

Although the Grinnell Police didn’t receive any reports of graffiti, they did have reports related to individuals that were allegedly yelling and harassing some Grinnell students. The reports said that multiple students of color had been harassed on October 14, November 4, and November 6.

Law enforcement identified the owner of a truck driven during the alleged harassment on October 14 and his high school son matched the description. He came in for questioning on November 3 but was not arrested, according to police reports obtained by The Fix. The individual, accused of yelling the n-word, is in special education, according to the police report.