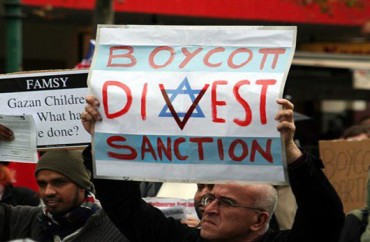 A Brandeis University study released last week found that “one-third [of respondents] said they had been verbally harassed over the past year because they were Jewish, while almost three-quarters reported having been exposed to anti-Semitic statements.”

The report was based on “an online survey of more than 3,000 North American university students” who were set to take “Birthright Israel” trip.

Some of the statements students said they were subjected to were “Jews have too much power” and “Israelis behave ‘like Nazis’ toward Palestinians.”

Canadian and California universities stuck out, in particular, as institutions where “hostility toward Jewish students was especially high.”

The study also noted, however, that the prevalence of anti-Israel and/or anti-Semitic attitudes on campus did not diminish Jewish students’ feelings of connection to Israel. Although they viewed their campuses as hostile to Israel, two-thirds of students surveyed in the study said they felt connected to Israel. Those levels “are higher than those found among similar individuals in 2014, before the Israel-Hamas conflict,” the study found.

Saxe said more than 400 Canadian students were surveyed, half of them undergraduates. “The study wasn’t designed to identify individual schools – the samples per school are too small to be highly reliable,” he said. “But virtually all the universities where there are Jewish students in Canada were included. And a fairly clear pattern emerged.”

The study singled out Canadian and Californian universities as places where hostility toward Jewish students was especially high. Saxe said there are a host of possible reasons why some campuses experience more problems than others. Those reasons include the number and level of identification of Jewish students.

“The more identified and connected to Israel attract more hostility and may, as well, be more sensitive to it,” he explained.

“One of the major effects of the boycott, divestment and sanctions [BDS] movement is that it brings out and allows for a toxic environment whereby people think it’s OK now to start saying outrageous things about Israel and Jews,” he said.

RELATED: Anti-Semitism at UCSB: A closer look at bashing the Jews on campus.

RELATED: UCLA student told she could not serve – because she is Jewish.