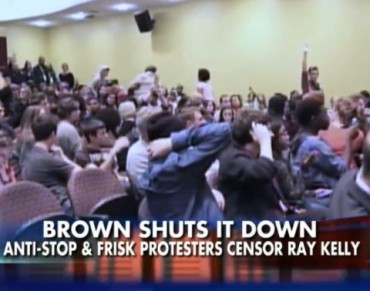 A lecture at Brown University by New York City Police Department Commissioner Raymond Kelly was scrapped after protesters – a mix of students and community members inside the auditorium – continually interrupted Kelly until administrators finally shut down the spectacle.

The protestors were upset about alleged police brutality and New York’s stop and frisk laws, which some deem racist. But one brave Brown alumnus and current biology professor there, Ken Miller, has called the protestors out for their shameful and boorish behavior last week. Ray Kelly, whatever his misdeeds, is no George Lincoln Rockwell (leader of the American Nazi Party who spoke at Brown University in 1966). Rockwell’s idea of racial profiling wasn’t “stop-and-frisk.” It was “round up and deport.” Kelly has been accused of fascism, but Rockwell actually was a fascist — and a racist — and was proud of it on both counts. Yet the Brown community of the 1960s opened its doors to him, to avowed communists, and, at the height of the Vietnam war, to anti-war activists as well as the generals in charge of that war — like Earl Wheeler, chairman of the Joint Chiefs of Staff. It was a lively and vibrant place.

The crowd who managed to silence a speaker yesterday accomplished something, to be sure. But it wasn’t a blow against racism, fascism or police oppression. It was a step towards a closed campus where mob rule determines who can speak and who will be shouted down. It was a shameful day. And it deprived every member of our community of the chance to hear Kelly and decide for themselves whether his policing methods are indeed the first steps of a Rockwell-like campaign against minorities and the poor in America’s greatest city. To those individuals, let me put it plainly. Yours was an act of cowardice and fear, unworthy of any of the causes you claim to hold dear. I hope President Christina Paxson will show the courage to stand up to you, to invite Kelly back and to give every member of this community the chance to have a “Rockwell moment” of the sort I had in 1966.