When a student in Phil Adamo’s class read a sentence from James Baldwin’s The Fire Next Time, the student did not euphemize the word “nigger” in the text.

When the class reacted negatively, Adamo asked the class if it was appropriate to instead use the “euphemistic phrase ‘the N-word’” when the black author had literally used the word “nigger.” Adamo also said the word that must not be said.

For this, the professor was first removed as head of Augsburg University’s honors program and then suspended. Some of his faculty colleagues threw him under the bus, and the private Lutheran university told offended students it would do their censorious bidding.

Harvard Law School Prof. Randall Kennedy, widely known for his scholarship on “regulation of race relations,” blasts Augsburg for the “dispiriting farce” it visited upon Adamo for quoting a black author.

In an essay for The Chronicle Review, the black scholar (below) says the university’s response to student and faculty offense “undermines Augsburg’s claim to be a serious institution of higher learning”:

How can anyone sensibly think that Adamo was “using” the N-word, in the sense of deploying it destructively? … 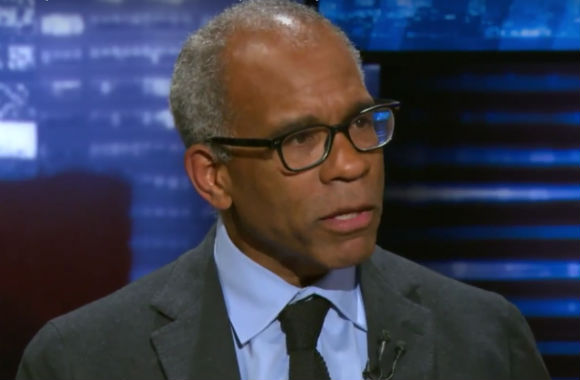 These are “obvious” distinctions, thus showing that these offended students are “unprepared for university life,” yet Adamo also failed his students “when he allowed himself to be cowed by the students” and leave his classroom at their demand, Kennedy writes.

Adamo’s apology letter “reads like parody”: He believes that “any and every topic can be explored” in the classroom, but that is informed by his “privileged position,” so now Adamo is contemplating “how it may be better not to explore some taboo topics.”

“Adamo’s genuflection to that prattle stupidly empowers those who have shabbily mistreated him,” Kennedy continues. He points to faculty whose “anti-intellectualism and illiberal conformity” would hold academic inquiry hostage to “the highly contestable claim that ‘harm’ has been done” in any given dispute.

They are the leaders who, in a moment of crisis, have failed miserably to educate their campus about the aims and priorities, freedoms and limitations that should be part and parcel of life at a serious university.