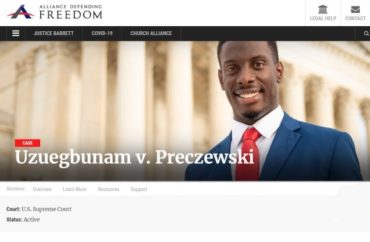 The following is authored for The College Fix by Ryan Everson, a communication integrity specialist for Alliance Defending Freedom and a College Fix alumnus.

To be sure, 2020 has been a uniquely polarizing year. Earlier this month, a new Politico poll showed that an alarming number of Americans—26 percent of those who are “very liberal” and 17 percent of those who are “very conservative”—believe there would be “a great deal” of justification for resorting to violence if their chosen presidential candidate loses the election.

In the middle of this, common ground has been found. Legal powerhouses of liberal, conservative, and libertarian persuasions have filed briefs in the U.S. Supreme Court’s first campus free speech case in over a decade.

After speaking on a public campus walkway, Chike was told by college officials he could only speak in one of two tiny “speech zones” that made up about 0.0015 percent of the campus. If the campus was a football field, the speech zones would collectively be the size of a piece of paper. Undeterred, Chike complied with the policy, only to be silenced again because someone allegedly complained about him.

Chike filed a lawsuit with the help of Alliance Defending Freedom in December 2016. The college initially argued that Chike’s speech—sharing the basic tenets of the Christian faith—was not protected by the First Amendment. Later, perhaps realizing its blunder, the college changed its unconstitutional speech policies and argued that the case was moot.

After sitting on the case for over a year, the district court accepted this argument and ruled in the college’s favor. So the college silenced Chike for almost two years and got a free pass. In the summer of 2019, the U.S. Court of Appeals for the 11th Circuit sided against Chike, accentuating a disagreement between the federal appeals courts on the issue of nominal damages: a small sum of money awarded to a plaintiff to officially acknowledge that their rights were violated and prevent that violation from continuing or reoccurring.

This is why the U.S. Supreme Court agreed to hear the case—and why such a diverse array of organizations have filed amicus briefs supporting Chike.

For example, left-leaning organizations including the American Civil Liberties Union and Americans United for Separation of Church and State have filed a brief highlighting the importance nominal damages play in addressing the violation of a wide range of constitutional rights, including free speech, gun rights, unreasonable searches and seizures, and others.

Addressing the issue from another angle, the Institute for Free Speech, which exists largely to protect political speech, filed a brief to explain the case’s likely effect on its work. And coming from yet another perspective, Jewish, Islamic, and Christian religious groups have filed briefs with strong interests in protecting religious expression.

Protecting free speech on campus is very important. But as this diversity of interests demonstrates, this case is about much more; it’s about ensuring the government cannot violate anyone’s constitutional rights and get off the hook.

Local governments certainly can promote health and safety—but we’re all aware of instances where the government has overstepped. The pandemic has reminded people across the political spectrum just how precious our First Amendment rights are.

And so has Chike Uzuegbunam’s case. Many of those siding with Chike may not agree with his Christian beliefs, but they recognize a basic truth: If courts allow the government to violate the rights of someone you disagree with, it’s only a matter of time until the government wields that precedent as a weapon against you.