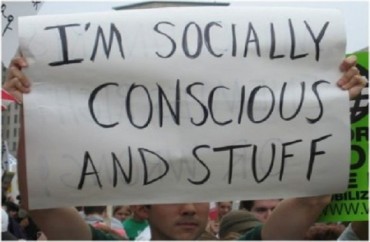 After protesters’ efforts at thwarting conservative speaker Ben Shapiro from delivering a talk last week were unsuccessful, campus progressives have turned their attention to the group that brought Shapiro there in the first place.

The school chapter of the Young Americans for Freedom is now the target of their wrath of, as flyers and posters were placed around campus which called the YAF a “hate group” and the “KKK.”

One poster calls YAF “Young AmeriKKKans for Oppression” & decries the club as a “hate group.” Of course, the protesters provide no evidence for their claims nor do they seem to realize that white supremacist groups like the KKK historically discriminate against Jews, like Ben Shapiro, but I digress.

Another poster proclaims that President [William] Covino “compromised” the safety of campus because he didn’t respond to “threats” that occurred “a month before,” the lecture. On this note, they’re actually correct, but not for the reasons they might believe. No evidence of any threats made by supporters of Ben Shapiro has ever been produced. Nor has any evidence been produced of the “firearm” that was supposedly brought to the protest. As someone who attended the event, I can attest to the fact that no firearms were present except for those carried by campus security.