BUFFALO, NY–The University of Buffalo’s Alberti Center for Bullying Abuse Prevention held its annual conference on Tuesday, and it focused primarily on the role of microaggressions in the classroom.

Yolanda Flores Niemann, a professor of psychology at the University of North Texas and a former dean, gave the keynote address that lasted three hours with a 15-minute break in the middle.

The address, titled “The Everyday Bullying of Microaggressions: Recognizing and Intervening,” intended to give the audience — mostly campus administrators from K-12 schools as well as colleges — the ability to learn to recognize microaggressions, understand how they constitute part of bullying, understand their psychological consequences, and respond to them.

Microaggressions are the most common form of bullying, Niemann said.

“Students that sit right next to each other can have different realities,” she said.

Microaggressions can come in three forms: verbal, behavioral, and environmental, she said. The different forms mean that students are constantly under assault by microaggressions from their peers in the form of the spoken world, their actions, and from simply inhabiting the environment around them. 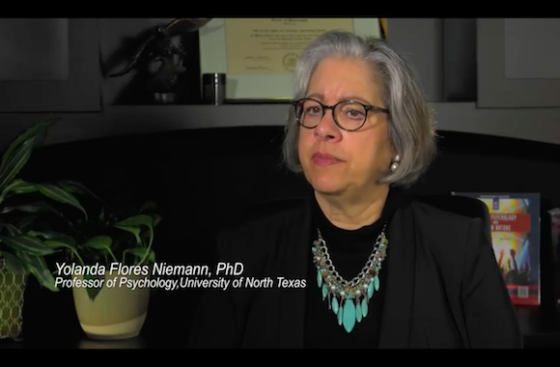 Niemann explained there are three different major types of microaggressions that communicate a spectrum of infringements on a student’s comfort. They are microassaults, microinsults, and microinvalidations. To demonstrate them, she showed a video titled “Microaggressions in the Classroom.” She made the video by putting out a call for anyone who had experienced a microaggression to contact her.

The video pointed out that microaggressions are oftentimes committed by those who believe they are well-intentioned, but are still hurtful.

Microassaults are overt acts of racism, such as assuming minorities are more prone to violence, or using racist or sexist epithets. She also pointed to hate crimes on college campuses like painting swastikas on campus property.

Microinsults are an indication that a minority is not accepted, or that an individual is an exception to their race or identity. Quotes like “You’re the prettiest African-American girl I’ve seen” or “Wow, you speak really good English” both qualify.

Microinvalidations dismiss the experience of a historically underrepresented or mistreated group. Oftentimes, these can come from faculty members teaching the students.

Such actions as mispronouncing names, using the wrong pronouns, calling on predominantly men or white people, scheduling exams during holidays, or using heteronormative hypotheticals in class, like saying “bring your boyfriend or girlfriend,” are all examples of microinvalidations students experience.

Niemann was especially critical of the statement “I don’t see race.” She described it as “disturbing” and an “outright lie.”

“It’s a sign that this person cannot be trusted,” she said, adding that indicates a lack of appreciation for different groups and a lack of recognition of different realities for different people.

The second half of the presentation concerned how students, faculty, and administrators can respond to microaggressions. Neimann pointed out that there is “attributional ambiguity” when someone witnesses a microaggression. People can think, “Did that just happen?” or can feel “impotence” at being unsure of how to respond, she pointed out.

The talk included activities during which the audience would speak to other listeners at their tables about their own personal experiences with microaggressions.

The keynote ended with a Q&A portion during which audience members and Niemann affirmed the need to work with students to develop coping strategies for dealing with microaggressions.

The keynote was followed by individual group sessions, which The College Fix did not attend or participate in.