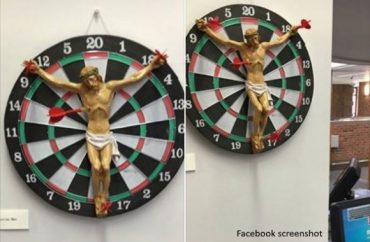 The Christian experience on college campuses is one in which our beliefs are not only rejected, but actively persecuted. Christians are the most oppressed group on campus.

Only about six percent of professors say the Bible is the “Word of God,” while almost ten times as many say it is an “ancient book of fables, legends, history, and moral precepts.” The same study found that the majority of professors in the fields of psychology, biology and mechanical engineering are atheists or agnostics, and teach their course materials from secular lenses, reported the Huffington Post.

A 2012 College Fix survey of hundreds of religious studies classes at universities across the nation found that professors prefer to ignore the subject of who Jesus was and what he preached. Classes that are focused on Christianity often avoid the mere topic of Christ’s teachings.

An award-winning philosophy professor at the University of Southern Indiana argued that the God of Christianity represents immorality. Another professor at Texas State University assigned the Bible as reading material in her mythology class, and asked students to read the book of Genesis as an example of folklore.

At our universities, we Christians are told that life as we know it was just an accident, and that we evolved from nothing more than bacteria. We are told the Son of God was just a wise man, no better than Mahatma Gandhi or Buddha. When we challenge these beliefs, we are called bigots, and told we need to be more tolerant of other beliefs. Is it any wonder that nearly 75 percent of Christian youths stop attending church during college due to intellectual skepticism?

“A lot of young people walk away from the Church when they get to college, and part of the reason is that we’ve never told them why Christianity is true,” says Frank Turek, a scholar who speaks at campuses nationwide on how to defend the Christian faith from a historical, fact-based and logical standpoint.

The modern university replaces God with government, and teaches students that any belief in God is irrational and unreasonable.

Liberal professors outnumber conservatives in American universities by more than 5 to 1, The Washington Post reports. And at the top 50 liberal arts schools, professors contributed some 99 percent of their political donations in the latest election cycle to Democrats.

These leftist professors proclaim big government as not only a solution, but the only solution, to society’s ills. This is not a mere theory, but rather, a fact to them.

It’s unsurprising that their students flocked in droves to support socialist Bernie Sanders, whose belief in the almighty big government was treated almost as a religious message. However, history has shown us the socialist message is no gospel. Godless Communist regimes have murdered nearly 100,000,000 people in the 20th century alone in the name of a humanist, atheist society controlled by an all-knowing, centralized, and all-powerful government. That’s not a myth, that is a fact built on mountains of dead bodies.

Saul Alinsky, the founder of modern leftist organizing in the United States, has said that “if there is an afterlife, and I have anything to say about it, I will unreservedly choose to go to hell … because hell would be heaven for me.”

Both Barack Obama and Hillary Clinton have shaped their professional lives around that man, who dedicated his most famous book to “the first radical known to man who rebelled against the establishment and did it so effectively that he at least won his own kingdom — Lucifer.”

Liberal university professors teach young and vulnerable minds that humanism, not faith, is the answer. They tell people that they can’t achieve things because of the color of their skin. They seek to divide, not unite, by teaching there is no solution in God, only government.

As Christians, we must stand against this. Are you willing to defend your God?

MORE: LAWSUIT: Student Talking About Jesus Told To Shut Up

MORE: Man praying at Clemson U. stopped by campus official