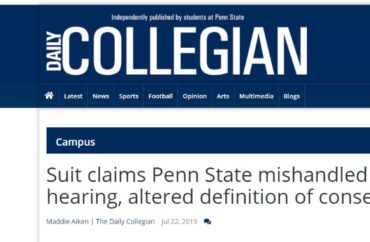 When a publisher meaningfully alters a published article, the changes are supposed to be publicly noted.

But when Pennsylvania State University’s student newspaper altered an article on a Title IX lawsuit, the only indication was a letter to the editor – apparently not closely vetted – published by the newspaper.

Two weeks ago, the Daily Collegian reported on the Title IX lawsuit filed against a university by a pseudonymous student found responsible for sexual misconduct. As The College Fix also reported, the suit claims Penn State retroactively changed its definition of “coercion” before giving a new hearing to “John Doe.”

The original Collegian article was fair and accurate, but it only covered the allegations in the lawsuit, prompting complaints from two students that it wasn’t fair to the female student who accused Doe. (Both parties are unnamed, so the Collegian couldn’t functionally get a response from “Jane Roe.”)

Student Divya Jain wrote in a short letter to the editor that the article “presents a very specific view of the story without giving readers any further links to public records to read and form their own opinions.”

She legitimately faults the reporter, Maddie Aiken, for not posting a copy of the lawsuit, but then makes the non sequitur that this shows the news article “has the qualities of an opinion piece and should be labeled as such”:

This is a very poor choice in how to handle the conversation on sexual assault and survivors that damages their stories.

I would urge you to remove this irresponsible article immediately, or make significant edits before re-releasing it that would remove its bias and add further reading to allow readers to form their own opinions. 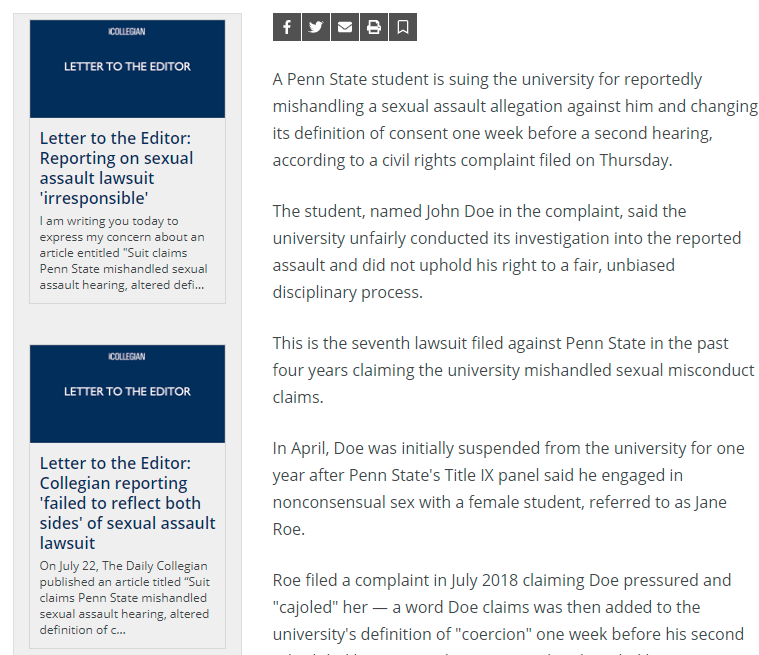 In a much longer letter to the editor, student Erin Brown wrote that the article “was not factually or legally wrong, but failed to reflect both sides of the case and to acknowledge that it only has one side of the story.” She eventually contradicted herself, saying the article should have taken “a survivor-centric approach.”

While her complaint largely boils down to the Collegian providing insufficient context to readers, Brown also shows her legal ignorance and advocates biased journalism practices in the name of “adequate representation.”

She makes some context-free claims herself, including that PSU has “the ability to structure its own framework under guidance from the federal government.” This nonbinding guidance from the Obama administration, which it treated as legally binding, was rescinded nearly two years ago by the Trump administration as it prepared a full rulemaking on Title IX regulations.

She also left out that PSU Title IX procedures are subject to the courts, many of which have struck down components of campus adjudications that are common across universities and were encouraged by the Obama administration. U.S. District Judge Matthew Brann, who is overseeing Doe’s lawsuit, has issued rulings against PSU in at least two other Title IX cases.

Brown complained that the Collegian reported on Doe’s claim that PSU’s ruling was preventing him from transferring to another school based on his academic record, which is central to his lawsuit. It should not have included these details, because his academic performance “does not prove one innocent of sexual assault.”

The student also faults the newspaper for providing graphic sexual details from the lawsuit, claiming it needed permission – from an accuser it could not reach – to publish allegations by an accused student. These details, which may eventually exonerate Doe, have “no journalistic value.”

She further claims nonsensically that “it is not Jane Roe’s responsibility to come forward and share her story to maintain a sense of credibility.” In essence, Brown urges the Collegian to heavily censor its own coverage of Title IX due-process lawsuits, which invariably make specific and relevant factual allegations about sexual activities by unnamed accusers.

But Brown also disclosed that the Collegian had altered the article after getting “several complaints from readers.” She points out the specific passages that were changed, even as she claims the changes did not give Jane Roe the coverage she deserved.

She notes that she brought her concerns to the editor-in-chief of the newspaper, who correctly defended Collegian reporting by citing its reliance on “what was included in the public documents.” Brown insists that the newspaper’s violation was “moral.”

The Fix reviewed the original and revised Collegian articles by comparing a version archived the day after publication to the current live version, using a text-comparison web tool.

To the newspaper’s credit, the changes do not appear to have made the article less accurate, less contextual or more biased. It added some details on PSU’s procedures, but the only relevant removal was Doe’s identification of both himself and his accuser as students in PSU’s Schreyer Honors College.

If the newspaper had altered the article to remove Doe’s factual assertions, such as his accuser’s sexual behavior and exculpatory evidence, its failure to note the changes would be more understandable.

It’s simply baffling that the Collegian didn’t append an editor’s note to tell readers that it made largely value-neutral changes, while publishing a letter to the editor that discloses it made changes in response to pro-accuser feedback.

The protesters' demanded "contextualization," moreover, is wrong–PSU is a public institution, and therefore must provide due process (what level of due process, obv., is the Q.) Protesters suggest only restriction on PSU procedures is "guidance from the federal government." pic.twitter.com/K9iW27jCy6

MORE: PSU expels student who says his accuser forced herself on him