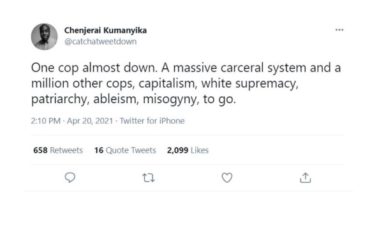 Campus presidents and professors cheered after former Minneapolis police officer Derek Chauvin was found guilty in the death of George Floyd on Tuesday.

In memos to campus communities or in social media posts, academia welcomed the verdict and pledged more anti-racism programs and efforts despite it.

Robert Robbins, president of the University of Arizona, called the verdict “historical” in an email to the campus community, adding the school has “much more work to do.”

“We need to recommit to building a more just and equitable society, which includes combatting anti-Black racism,” Robbins stated.

Nathan Hatch, president of Wake Forest University, said in his email to the campus that despite the verdict there “is still much to do to live up to our aspiration of justice for all.”

“In the coming days, you will hear more about how this community is responding to and joining the effort to help address inequity, racism and the oppression of people of color,” Hatch wrote.

One cop almost down. A massive carceral system and a million other cops, capitalism, white supremacy, patriarchy, ableism, misogyny, to go.

Rich Milner, a professor of education at Vanderbilt University, tweeted: “For educators wondering if they should ‘teach’ the guilty verdict(s) of Derek Chauvin in the murder of George Floyd, the answer is yes. This IS the curriculum.”

For educators wondering if they should "teach" the guilty verdict(s) of Derek Chauvin in the murder of George Floyd, the answer is yes. This IS the curriculum.

Dartmouth College President Philip Hanlon, in his message to the community, said “that while the case has reached its rightful conclusion, our work in addressing the underlying systemic racism that led to George Floyd’s murder has only just begun.”

The Ivy League school is planning a panel discussion titled “The Chauvin Verdict: A Community Discussion on Race, Crime & Justice.”

Several students tweeted that their professors had canceled class so everyone could focus on the verdict, while others quoted scholars’ reactions.

My professor canceled class so we could focus on the Derek Chauvin verdict. I LOVE MY SCHOOL

Notre Dame professor John Duffy calls the verdict, “A single drop of water on a tongue parched over 400 years.”

Today my professor allowed us to watch the verdict instead of having class. She allowed us to support one another as we sat in the classroom together. Ill never forget that. ❤️

Several presidents, in their messages to their respective campus communities, included contact information for counseling services in their notes. For example, Humboldt State University’s message included numbers not only for its Counseling & Psychological Services but also its Office of Diversity, Equity & Inclusion.

“Perhaps the outcome of this trial can serve as a powerful statement and the beginning of a more hopeful path to needed reforms in a justice system and larger society that truly offer ‘liberty and justice for all,” Humboldt’s message stated, adding: “This work is far from over.”