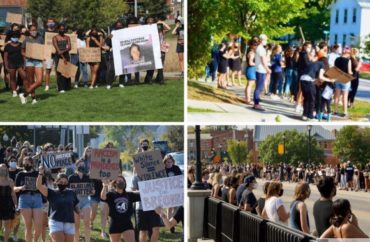 It’s long past clear by now: If you want to hang out with friends, make sure to chant Black Lives Matters slogans while you’re doing it.

Vermont’s Middlebury College facilitated a 500-person student rally that included “some faculty and community members,” organized a day after the Breonna Taylor verdict in Louisville, The Middlebury Campus reports.

Under its Phase 2 guidelines that started in mid-September, Middlebury banned gatherings of more than 10 people, “indoors or outdoors, on or off campus.” This meant students could get in trouble for even small gatherings outside Middlebury’s control if they were reported.

Even “organized outdoor activities” with advance approval by the college were limited to 75 people. (On Tuesday the administration said it will move to an “expanded Phase 2” that does not change limits on gathering size.)

While the campus newspaper claimed protesting students gathered in “carefully coordinated groups of 10,” and “college staff helped coordinate the march and ensured protesters followed social distancing rules,” Campus Reform reports that “pictures of the [Sept. 25] event raise questions as to whether those procedures were followed.”

Four days before the college rolled out the red carpet for an event that explicitly violated its own policies, Middlebury announced that 22 students had violated its COVID-19 policies. It revoked their “on-campus housing privileges” and banned them “from visiting, studying, or taking courses on campus.”

“I can tell you that these were very difficult decisions to make, but there is nothing more important than the health and safety of our community,” Dean of Students Derek Doucet claimed, which in retrospect was false:

This is disappointing news in the context of the overall high level of compliance our students have demonstrated to this point, which has allowed us to advance to Phase 2 of our reopening. …

Our requirements are designed to protect the entire community. Adhering to them is of the utmost importance as we continue to live with this pandemic.

Last Friday, over 500 people, almost all students with some faculty and community members, gathered in protest after the verdict was announced that none of the police officers who shot and killed Breonna Taylor would be charged for her death.https://t.co/Zswx00QZZx

It claimed that it would “continue to prioritize” “strict physical distancing.” Just not for political causes popular with its student body.

The college has continued to selectively enforce COVID-19 rules since the 22 students were punished. Its COVID-19 dashboard shows 90 “substantiated violations” and 90 students disciplined, with 27 of those “removed from campus.”

Unlike some other colleges that reported high “case” numbers from the novel coronavirus, Middlebury’s case numbers are staggeringly low compared to its draconian response. As of Thursday morning, it has only two positive cases out of 9,286 tests performed since August.

As a reminder, “cases” do not measure infectiousness or even distinguish between active viruses and “genetic leftovers.”