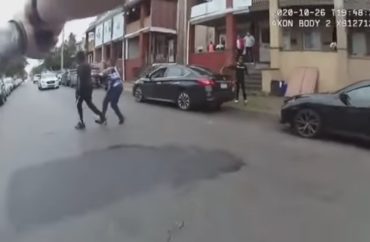 ‘Weeping’ for non-student who threatened to shoot a woman

The University of Pennsylvania is not revisiting the premise of its statement mourning the death of a knife-wielding man after bodycam footage showed police warned him 11 times as he advanced on them.

The Ivy League school, located near the West Philadelphia neighborhood where police shot Walter Wallace, jumped to conclusions when it rushed out a statement two days after the shooting.

“Our community is grieving the loss of Walter Wallace Jr. His death is a tragedy on so many levels, and a stark reminder of the life and death struggles faced by so many Black Philadelphians,” according to the statement, signed by President Amy Gutmann, Provost Wendell Pritchett and Executive Vice President Craig Carnaroli.

Penn also held a vigil for Wallace on Nov. 1, despite the fact he was not a Penn student. Chaplain Charles “Chaz” Howard, vice president for social equity and community, led the vigil.

Howard told The Daily Pennsylvanian he was “grieving and weeping” with Wallace’s family and all other black people “who are tired. … It is terrifying to see people who look like you killed by police officers.”

The Nov. 4 release of bodycam footage, which complicated Penn’s narrative of Wallace’s death, didn’t dissuade Penn’s Museum of Archaeology and Anthropology from releasing its own statement the day after.

“[W]e continue to grieve with his family and neighbors in West Philadelphia, and all fellow Philadelphians,” its Instagram post says. “We restate that #BlackLivesMatter and reject systemic racism that continues to plague our communities.⁣”

Alum cop criticizes Penn for ‘contributing to the widening divide’

Students were quick to judge Wallace as the latest victim of race-based police brutality. A group identified as the Penn Scholar Strike for Wellness called on students to boycott classes on Election Day and the day after. The Daily said it was meant as a protest of Wallace’s death, Penn’s refusal to give students Election Day off and its elimination of fall break.

Amira Chowdhury, founding member of Penn Justice Democrats, told the Daily her organization is mourning with the neighborhood but “also raging with them” and “raging at Penn” for maintaining “one of the largest university police departments in the country.”

The university should invest more of those police resources “into social resources to protect these community members and support them and not meet them with violence,” she said.

Not all Penn students felt honoring Wallace was appropriate, however.

“People who are criticizing the police officers who shot Wallace are dangerously arrogant and out-of-touch,” a Penn undergrad told The College Fix, asking to be identified only by her first name, Angela. “What else is dangerous is the media and university’s deliberate portrayal of Wallace as an innocent black man who was hunted by police.”

A recent graduate of Penn who is now a police officer shared similar sentiments.

“If an officer is put in a situation where their life or somebody else’s life is threatened, they have the right to defend themselves,” the alum told The Fix. “Chastising officers when they are doing their job unnecessarily elevates tension and anger towards police.”

She worries that “Penn is contributing to the widening divide between law enforcement and citizens without just cause to do so.” The alum said her police department would not let her be identified.

The Penn College Republicans, the only right-of-center group currently on campus, do not appear to have commented on the university’s rush to memorialize Wallace.

‘He was our neighbor. And his loss is felt profoundly’

While not provoking the same nationwide university protests as did George Floyd’s death in Minneapolis, Wallace’s death affected Philadelphia-area students beyond Penn.

Students at Haverford College went on strike against classes, coursework and even their college jobs to protest the administration’s message encouraging them not to participate in Wallace protests in Philadelphia.

The strike at the private liberal arts college in the wealthy Main Line area is now in its second week, according to a Monday report by Inside Higher Ed. An organizer said more than half of enrolled students claim to be participating.

Last week in a Zoom session with hundreds of students and faculty, Raymond offered to resign as president “if I am an impediment” to this work, Inside Higher Ed said.

Penn’s Oct. 28 statement is careful not to imply that police shot Wallace because he was black, but it emphasizes that in 2020 “we have witnessed the repeated violent deaths of people of color, and struggled with the emotions and rage that stirred.”

Wallace’s death “is particularly hard for all of us at Penn, because it occurred in our West Philadelphia community,” the Penn leaders wrote: “He was our neighbor. And his loss is felt profoundly.”

‘Perpetuating the notion that police-attackers are victims’

A week after Penn’s statement, the Philadelphia Police Department for the first time released bodycam footage of a police shooting, according to NPR.

Its summary of the footage: Police wait on the sidewalk as a person inside the house says “put the knife down” three times. Wallace steps out the door holding a “large knife.” Two officers together command him “about 11 times” to drop the weapon.

He moves toward them “with the knife at his side,” but his mother runs between him and the officers, whose guns are drawn. Wallace continues to the opposite sidewalk and then turns back toward the middle of the road, where the officers are standing.

They shoot him several times each, though he did not appear to “get closer than 10 to 15 feet” from them, according to NPR.

Penn media relations has not responded to a Fix query Saturday on whether the university would update its statement on Wallace to reflect the bodycam’s revelation that he moved toward police with a knife, ignoring their repeated commands to drop it.

“This is a man who has been in and out of jail for years,” undergrad Angela told The Fix, citing Wallace’s public criminal record. He was “awaiting trial for threatening to shoot a woman and her house up” and previously pleaded guilty to assault, robbery and weapons possession.

“Sorry, but I do not honor someone like that,” she continued: “The University of Pennsylvania is hosting a vigil for a person like this?” Angela asked why Penn didn’t have a moment of silence for a 15-year-old girl shot amid the looting that followed Wallace’s death.

“When I graduated from Penn, I was filled with the ambition to become the difference that I wanted to see in law enforcement,” the recent Penn alum who became a police officer told The Fix. “Like the majority of police officers, I have a strong desire to defend the helpless.”

But the university’s response to Wallace’s death “has been disheartening,” she continued: “Penn has chosen to memorialize a violent individual with extensive criminal history, and they are perpetuating the notion that police-attackers are victims.”