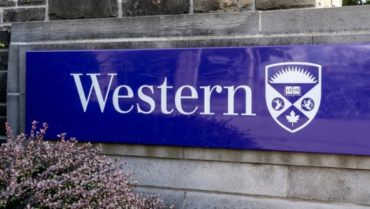 The CBC reports documents show that Western has “quietly” submitted an application to the Ontario Office of the Public Guardian and Trustee for the removal of Kenneth Hilborn’s name from the scholarships. Hilborn taught at Western for 46 years.

Western’s history department, which finances four scholarships from a $750,000 Hilborn donation, created a “research group” to determine if the critics’ charges had merit. According to the group, Hilborn’s body of work “‘did harm’ and caused ‘epistemic violence by suppressing, dismissing and trivializing people who were oppressed, vulnerable or discriminated against.'”

Specifically, according to Dalhousie University History Professor Will Langford, Hilborn “combined his work as an international relations historian with unrelenting fringe-right activism,” the most objectionable of which, arguably, was his defense of South African apartheid.

But Hilborn also believed in a “firmer anti-communist intervention in the decolonizing world” and “defended ‘Western civilization,’ which he felt guarded liberty and rested ‘on the overriding responsibility of the individual to God – to an eternal moral order.’”

MORE: ‘Students for Western Civilization’ wants to set up shop at Canadian university

Ironically, in an ideological 180 from what we see today on campuses, Hilborn also made his views known to his students and even disrupted student events with which he disagreed, Langford wrote.

Francine McKenzie, a professor at Western who also teaches history and international relations, responded to Langford’s 2020 essay with one of her own that same year entitled “Western’s history department and the Hilborn student awards.”

“The Hilborn awards do good, now and forever,” she wrote. “While the Hilborn awards are on a much more modest scale than Rhodes scholarships, the comparison is useful: The Rhodes Trust does not endorse Cecil Rhodes’ views; the history department doesn’t endorse Ken Hilborn’s views.”

In the essay, she noted Western’s history department “discussed the implications of having student awards created through his bequest and decided that the awards should stay.” …

The history department research group recommended removing Hilborn’s name from the scholarships, court documents indicate, because if the school didn’t, Western would “be seen as tacitly condoning and endorsing his views,” something the researchers noted “runs counter to Western University’s goals and values.”

Professor Langford said that while a renaming such as the “Kenneth Hilborn Scholarship for Anti-Racist and Feminist Research does have a nice ring to it,” the best solution is to “make publicly available a critical appraisal of Hilborn’s career and activism, perhaps accompanied by an annotated bibliography.”