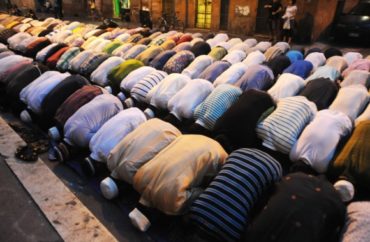 ‘May we find peace, health, and unity in this holy month as we look to the future with hope,’ the Loyola alumni group said

Loyola University Chicago’s alumni group found time to wish Muslims a “blessed Ramadan” but did not have time to wish or pray for Easter on its Facebook page.

“We at Loyola wish for a blessed Ramadan for Muslims within our community as well as across the world,” the Catholic university’s alumni Facebook page said. “Muslims will be fasting each day in this period of deep introspection,” the April 12 post said. 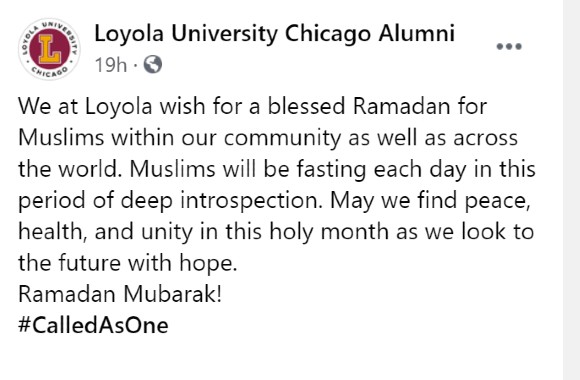 “May we find peace, health, and unity in this holy month as we look to the future with hope. Ramadan Mubarak!” the group said.

We wish for a blessed #Ramadan for Muslims within our community as well as across the world. Muslims will be fasting each day in this period of deep introspection. May we find peace, health, and unity in this holy month as we look to the future with hope. Ramadan Mubarak! pic.twitter.com/n9UpS2AQ5U

But a search of their page does not turn up an Easter post on April 4. In fact, a review of their social media finds only one post about Lent, and no posts about Ash Wednesday. The Twitter account also did not tweet about Easter.

The College Fix reached out to the alumni group through email on Tuesday morning. The Fix asked if it could confirm that university staff maintain the page and why the page did not post about Easter or Ash Wednesday.

The Fix did not receive a response to the email inquiry.

Other university entities such as Campus Ministry also did not post about Easter. It did find time to say that it supported homosexual students after the Vatican issued a statement rejecting calls from some church activists for priests to bless homosexual unions.

“May the glory and the promise of this joyous time of year bring peace and happiness to you and those you hold most dear,” with information about how to watch Easter Mass.

Loyola is a fan of promoting the idea of “all faiths,” being welcome at the Jesuit university. “Secure in our Jesuit Catholic identity, we understand Loyola University Chicago as a home for all faiths,” the university says on its “Mission Integration” page. “Concretely this support is evident in the presence of Hillel at Loyola, the student Mosque and the Puja prayer room. We encourage each person to celebrate their personal faith and to respect and learn from other people of faith within our Loyola community.”

These views, expressed on social media and by the university at large, are antithetical to many of the views of prominent Jesuits, including Robert Bellarmine and Peter Canisius.